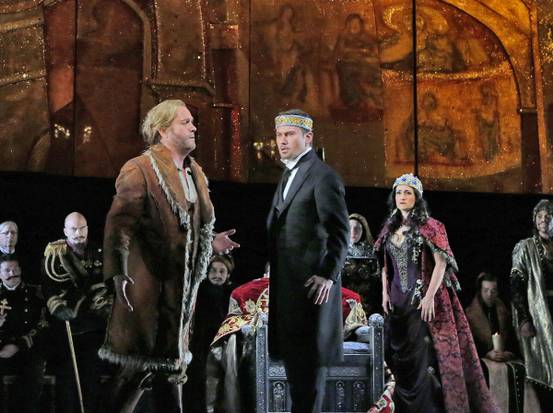 I have now listened to three different people try to explain Karol Szymanowsky's [Shim-on-OFF-sky] King Roger (composed 1918-1924) to no avail.

I'm going to give it a shot.  First off there is what you see.

Byzantine
We begin in a church service with beautiful choral singing and bright royal costumes.  The Shepherd arrives talking about his non-Christian god and the priests and congregation want to kill him.  Only Queen Roxana speaks on his behalf.  The three characters visible in the above picture are Shepherd (sung by tenor William Burden), King Roger (sung by baritone Mariusz Kwiecien), and Roxana (sung by soprano Erin Morley).

Greek
The scene takes place in a ruined Greek temple.  The Shepherd appears in fuzzy pants and looks a bit like a satyr, the servants of Dionysus.  Roger has a spiritual awakening and rises to greet the rising sun.

Got that?  No, I thought not.  I'm not sure it is possible to understand this opera at all.

So here's my theory:  Szymanowsky wrote an opera about things he liked.  He liked Sicily and went there often.  At some point he heard about the medieval King Roger II of Sicily with his uncharacteristic religious tolerance.  He liked Nietsche's The Birth of Tragedy which is about counterbalancing influences of Apollo and Dionysus in Greek tragedy.

He ignored time and space and mixed all this together in an incomprehensible libretto with the help of one of his relatives.  They didn't mind that it made little sense.  Each person can make his own interpretation.  An explanation that focused strictly on Roger might be more comprehensible, but ambiguity is not altogether unpleasing.

Szymanowsky was a composer and may be regarded as more successful in that area.  We discussed the composers who may have influenced him and mentioned Debussy, Ravel and Stravinsky.  For my ears I definitely heard what I lovingly call Movie Music.  The combination of a world-wide depression and the beginning of talkies brought a lot of European composers to America and American films.  Alfano, Korngold, guys like that.  The specific details would vary from composer to composer, but the general style is very similar.  I call the style Movie Music because it is seldom heard today outside that medium.  King Roger will never make the 100 most performed operas list.

The performance was marvelous.  Szymanowsky could hardly have asked for more.  Kwiecien was fabulous as King Roger, and Erin Morley was simply incredible as Roxana with her soaring, mysterious singing.  The orchestra played this difficult score brilliantly.  It's all atmosphere and is over in 90 minutes.  This was the last performance, so everyone did their best.
Posted by Dr.B at 10:28 AM