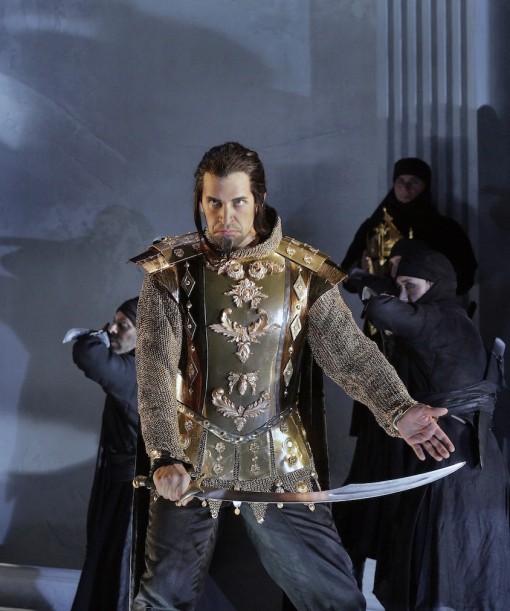 This was the world premiere of the new critical edition of Rossini's Maometto Secondo to be published next year.  In his liner notes Dr. Philip Gossett goes out on a limb and says, "...Maometto II is one of the greatest serious operas written during the 19th century."

In my youth there was no serious Rossini in the repertoire.  I feel especially blessed to be living in the era of Rossini revival.

The odd thing about Maometto is all the ensembles.  By 1820 we are living in the dying ends of opera seria, a form that is more pure in Handel, a time when da capo arias are almost the whole thing.  In Maometto II everyone gets an aria, Anna gets a lot more, but that still leaves a lot of ensembles.

It is a monumental opera, more like something by Verdi and not at all the kind of opera usually taken on by Santa Fe.  This season the excellent chorus is especially prominent.

This opera requires four magnificent singers, and it got them.  My fellow bloggers, who have already come and gone, seemed critical of these singers.  Bah humbug!  They were all wonderful.

At the top is Luca Pisaroni as Maometto.  According to Wikipedia he is from Venezuela but moved to Italy when he was 4.  That's Italian enough for me.  I also understand that he is Thomas Hampson's son in law.  Hampson was in our audience. 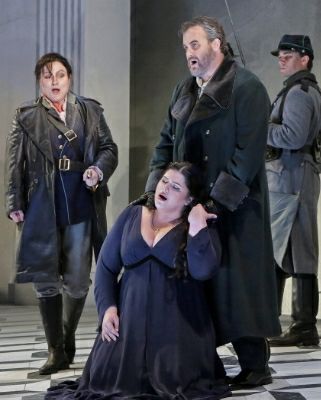 In the picture above we have our other three artists.  Left is Patricia Bardon as Calbo, a contralto almost in the Ewa Podleś tradition.  This part is wickedly difficult with lots of notes on either extreme of the range, and she handled it well.

Center is the magnificent Leah Crocetto as Anna, an individual fanatically devoted to duty.  In one night I am suddenly a fan.  It is a very long and difficult role which Leah executed with increasing assurance.  Right is the tenor Bruce Sledge as Erisso.  He was also excellent.  I stood for Leah.

There is a glaring flaw in this production.  At the end Maometto faces stage left and Anna faces stage right.  This puts Maometto's sword on his upstage side, so when Anna uses it to stab herself, this is completely invisible to the audience.  Obviously if you reverse where they are standing, all this changes.  We were warned.

Thank you for this wonderful experience.
Posted by Dr.B at 10:54 AM

If Maometto is facing stage left then his sword in his right hand is downstage -- thus in view of the audience. I should know as I directed the production and am always very careful about these things. Perhaps there was a problem in the performance you attended -- with the violent storms which sweep through the Santa Fe auditorium sometimes the performers must make adjustments. Not that you mentioned me or the directors of the other productions.

Hi. I'm not a professional reviewer, nor am I trying to become one. My educational and professional background is in singing, so that's what I focus on. I find the music to be the least well covered in the press of all the parts of an opera. Lots of bloggers write only about the production, so I tend to think it isn't being slighted. I was more concerned that I didn't write about the conductors. Five operas in 5 days is a lot for me.

Luca is right handed, and the sword he wore was about half the length of the one shown in the picture and was on his left side. We were warned by Oliver that this would not play. I had my binoculars and watched very carefully.

You are making it sound like he was supposed to have drawn the sword and then she stabbed herself with it, but we didn't see it until their bodies separated and the stabbing had already occurred. This is probably not what you intended. I don't know what else to say.

You don't need to say anything else (this being your blog)! I carefully rehearsed this scene and when I regretfully left beautiful Santa Fe (after the 2nd performance) it had always been clear that Anna took hold of Maometto's sword (in his right hand) and stabbed herself with it. Anyway, now the show is history (although several opera companies are discussing presenting it along with the brilliant cast in the future). I too grew up when Rossini's serious works were virtually unknown and am very proud to be playing a part in bringing these great pieces back to the stage (in the future I am staging La gazza ladra, actually a semi-seria piece, hopefully Semiramide, and I very much want to do Zelmira!).

I have an idea about this. It was obvious that Leah, while she may not have had a problem singing the entire opera, was having trouble standing the entire time. Changes?

What a wonderful opera, esp. the version that Santa Ferguson had, with the original ending and the terzettone (big fat trio). The only commercial DVD is of the happy ending.