The Pearl Fishers at Santa Fe 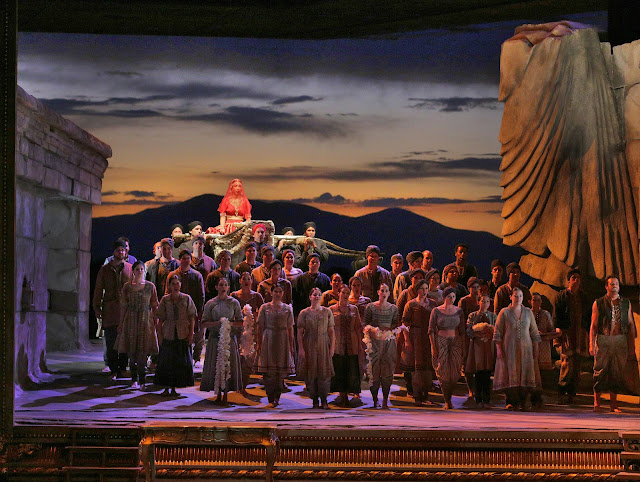 "If we'd known the music was going to be so beautiful, we would have worked harder on the libretto."

These are the librettists of Bizet's The Pearl Fishers speaking. It was wonderful to see this outdoor opera in this outdoor setting. The sky in the photo is the real sky.

The plot is an odd love triangle: Zurga and Nadir love each other, and both of them love Leila, who is a priestess and sworn to chastity. Now, for most species the girl just says, "I like that one," and it's all over. For humans it's a lot harder. Zurga is the king and hates it that Leila has chosen Nadir. Zurga only lets them off because it turns out Leila once saved his life. Up until then he still wanted to kill them both.

The production does a good job of creating the atmosphere of mystery and secrecy surrounding Leila, the mysterious priestess who gradually transitions to a private person. The production ends ambiguously with Zurga standing on the unlit pyre and Nourabad standing menacingly off to the side.

The fourth character in this opera, so to speak, is the chorus of the pearl fishers. At the Santa Fe Opera the chorus is made up of the apprentices, and they can really blast it out. They added a lot of intensity and excitement.

Nicole Cabell was lovely as Leila and sang with a lot of nuance. This made me feel anxious to hear her in San Francisco next season in I Capuletti. Eric Cutler is very large for a tenor, and as Nadir he is made to look a lot like Indiana Jones. We can see why Leila goes for him. Christopher Magiera sings Zurga the new king of the pearl fishers. Individually they are fine, but they don't particularly go well together.

The music of The Pearl Fishers if very beautiful and atmospheric and is what brings anyone to this opera.