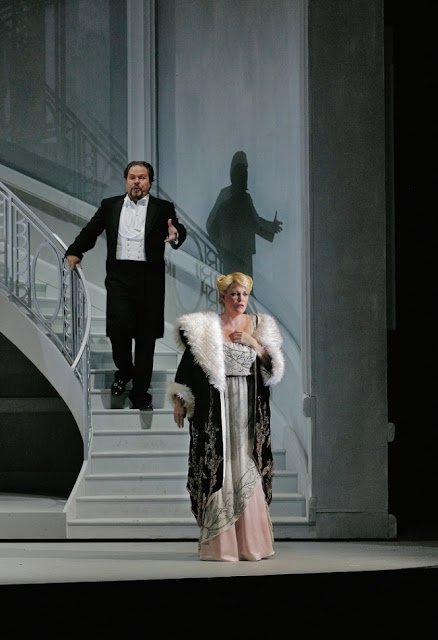 At the Santa Fe Opera, our last opera for the summer was Strauss' Arabella with these two stars:  Mark Delevan as Mandryka and Erin Wall as Arabella.  Musically they were extremely well matched.  Mark has a big beautiful voice and projects well the quality of a gentleman from the country.

Set in Vienna, Arabella begins with a fortune teller who predicts that someone will come for Arabella from far away.  She asks if there is another daughter--a very intuitive fortune teller.  Adelaide, Arabella's mother, confesses.  Zdenko is really Zdenka (sung by Heidi Stober) disguised as a boy.  The fortune teller predicts that an officer will cause confusion.  Zdenka immediately knows that this is Matteo (sung by Zach Borichevsky) who loves Arabella and is loved by Zdenka.

Mandryka is clearly the stranger from afar, and they fall instantly in love.

At the party for carnival the next day Mandryka sees Zdenko give Matteo the key to Arabella's room and immediately becomes jealous.  No one suspects that it is Zdenka who goes to bed with Matteo and not Arabella.

Arabella decides to forgive Mandryka because how was he to know that this young man with her bedroom key to hand out was really her sister with her own agenda?  Anyone could be confused.  The production is ambiguous about Matteo's reaction to all this.  In fact the ending of the opera is a bit lame.  It would hardly do for Arabella to stab herself like Anna or leap off the top of the hotel like Tosca.  Would it?

Conducted by Sir Andrew Davis, this entire opera was completely permeated with the Strauss style.  It was a joy.

We didn't have quite as much behind the scenes gossip as last year, but we did learn that Erin Wall is ... ahem... five months along?  We didn't guess.