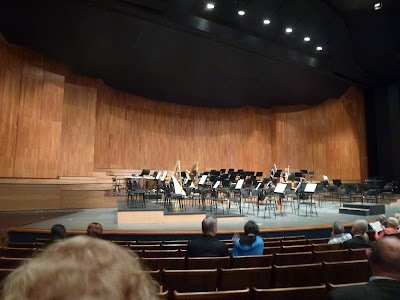 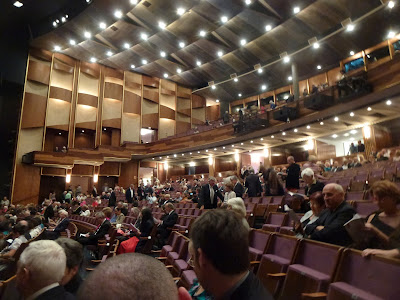 The large hall set up for a concert.

I enjoyed very much my visit to the Salzburg Festival.  I went on a tour which meant that I was well taken care of to compensate for my somewhat ill health.  Instead of doing touristy things, I generally sat in my room and watched television.  This helped to revive my German.  At one point I even carried on a long political conversation with the bus driver, all in German.  It is easier for me to talk about American politics with people who are as puzzled by it as I am.

The quality of the music for everything I saw was very high.  I thought of suggesting that American singers to be sure their careers include time spent in the German speaking world, for this is truly the center of opera today.

I was as stunned by Norma as I expected to be.  It felt revolutionary to me.  To move the opera to another time and place in order to more fully explain it, instead of the usual reason which seems to be to obscure it with irrelevant nonsense.  The purpose of modern productions often seems to be to relieve the boredom of the producers, to alleviate the tedium of having to stage the same operas over and over.

I began to wonder if other operas might benefit from this approach.  The most film noir of plots is Streetcar, coming this year to the LA Opera.  A brutal and dark approach might bring it to life.  I'll try to think of some others.  It was, of course, the intensity of Cecilia's acting that brought Norma to this level of success.  Other singing actors might not be able to reach this.  Does that mean they shouldn't try? 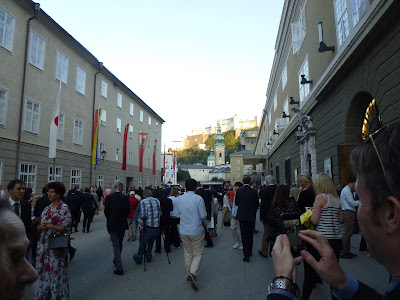 Next year Luca Pisaroni will sing his Leporello.

P.S.  I promise to stop yammering about the Salzburg Festival, but I forgot to mention something.  At all the concert performances the orchestra swarms together onto the stage--to applause--just before the conductor enters.  There is none of this meandering onto the stage one by one, sitting around gossiping and fiddling with equipment that seems universal in the English speaking world. So there are options available.

Email ThisBlogThis!Share to TwitterShare to FacebookShare to Pinterest
Labels: +100, All Travel, Austria, Europe