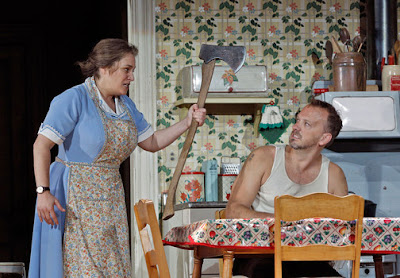 Last night at the San Francisco Opera I attended the premiere of Tobias Picker's new opera Dolores Claiborne, which is based on a novel by Stephen King, which I have not read.  According to Picker, King sold him the rights for $1, more a critique of opera than of Picker.

The genre I would choose for this opera is verismo, the realistic portrayal of the lower classes.  It doesn't get lower than Dolores (Patricia Racette) who is a maid for Vera Donovan (Elizabeth Futral shown below).  Dolores hates Vera. 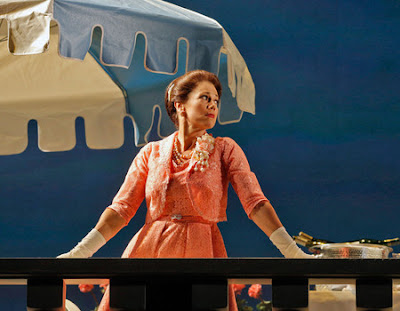 The cozy picture of her family group seen below (daughter Selena, Susannah Biller, husband Joe, Wayne Tigges, and Dolores) would give you no perspective at all of her actual family life.  In this scene Dolores has brought home viewers for an up-coming eclipse, so they can all view it without harming their eyes.  Very domestic, don't you think? 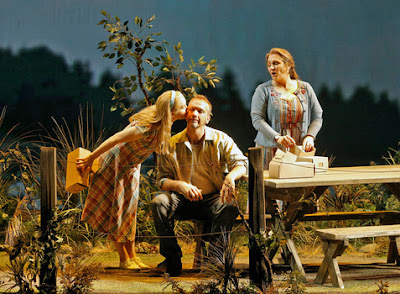 The plot summary in the program might lead one to expect confusion, but the constant flashbacks were all handled with intelligent smoothness.  At the apron of the stage we are in the police station where Dolores has been brought for questioning after the death of her mistress.  The flashbacks appear at the back, and some of them are absolutely beautiful.

In one extended scene Dolores and Selena are riding together on the Little Tall Island ferry while boats and islands go by in the background.  It is here that Selena tells her mother that her father is molesting her.  Dolores says "No" but knows the answer is "Yes."  This is graphically dramatized in the final scene of the act.

In the second act is the eclipse when Dolores tricks her husband into falling into a well in the dark.  When he appears to be climbing out, she whacks him with a rock.

Susannah Biller as Selena appears as this character both as a child and as a grown woman.  In her guise as a child she sings a lovely solo to the stars that are visible during the eclipse.  This is the best solo.  The picture below from Opera News is Selena as an adult, perhaps remembering the eclipse she experienced as a child. 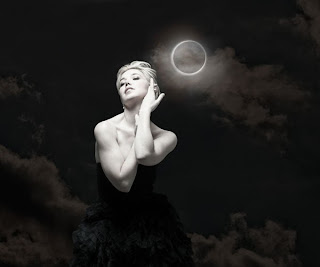 At the end of the opera Selena appears as a lawyer for her mother who is accused of pushing her employer down the stairs.  Dolores and Vera sing together the famous line from this story, "Sometimes being a bitch is all a woman has to hold on to."  Vera falls down the stairs--done very convincingly by Elizabeth Futral, a wonderful actress--and dies all on her own.  I'm not sure Selena believes this.

It's a sad, depressing story that you completely get swept into.  Nothing musical sticks in your head.  My opinions are going to go here.  The score in an opera isn't background music--it's music.  If you don't know the difference, I can't help you.  If you need to have it explained to you by Patricia Racette that a singer's voice has something called a "passagio," you are not ready to write an opera.

The singing actors were all incredible.  No one shook the prompter's hand, a good sign when the leading lady, Patricia Racette, stepped in almost 3 weeks ago.  She always seemed secure in her part, but her Dolores is an unhappy but not an evil woman.  At the end you feel you would have done the same.

Futral and Tigges are very fine indeed, just the right amount of arrogant and cruel.  Vera gives all her money to Dolores who doesn't want it, making Selena even more angry.

I would not wish to offend Patricia Recette, but the star of this show was Susannah Biller as Selena.  Her characterization of Selena as a child was complete, and absolutely did not prepare us for Selena as a 40 year old lawyer in high heels and her lawyer power suit.  She was stunning.

we were in the hall last night, too; found the opera pretty disturbing...maybe the best of the premiers we've seen in 2013...wondered if,"The Human Voice" aside, there is a darker work in all of musical theater. great write up.

the high point for me was when Joe picked up the axe and the young woman to my left gasped, "oh NO!"

Zajick would have been scarier.