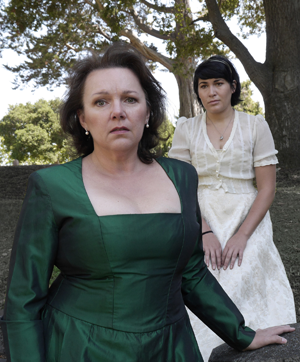 Marie Plette as Vanessa and Nikola Printz as Erika

Samuel Barber's Vanessa (libretto by Gian Carlo Menotti) had its premiere at the Metropolitan Opera in 1958 with Eleanor Steber as Vanessa.  Like Patricia Racette in our Dolores Claiborne, Steber stepped in very late in the preparation process.  In my mind it's Kiri te Kanawa.

A company currently without a house, West Edge Opera decided to produce this opera anyway in a semi-staged version.  We get those in Sacramento, and they consist of the full orchestra on the stage with the singers in front.  The singers move and act as they would in a fully staged opera.  It's a large orchestra, so the Thrust Stage at Berkeley Rep left only a little space for the actors.  But not to worry.  Vanessa is about love with only minimal action.  The singers all had big voices sufficient to carry over the orchestra.  Thank you.  This was helped by the outstanding vocal writing of Samuel Barber.

I could hear but not see what turned out to be a synthesizer at the back of the stage.  I wasn't sure what this was supposed to represent.

The question is is the plot of Vanessa a circle?  Do we end where we began?  Here is the great one singing Vanessa's opening aria.  Perhaps this isn't fair, but nothing will give you a better idea of the wonderful music in this opera.

Vanessa has been waiting for Anatol to return for 20 years.  She has waited with perfect patience with her niece Erika and her mother, sung by Malin Fritz, a lovely tall woman who lurks silently in virtually every scene.  The stately old Baroness adds exactly the right gloomy atmosphere to this strange, romantic story.

When Anatol appears, it isn't really Anatol but his son, also Anatol.  Are you staying with me?  Anatol is a fortune hunter who has spent his life hearing his father talk about the mysterious Vanessa.  He wants to see for himself.  Vanessa is the complete romantic and immediately accepts this new Anatol as her lover.  She is happy.  He, however, has wooed and spent the night with Erika, and later proposes to her.  Erika is not the romantic Vanessa is.

There is no perfect recording on YouTube of the quintet from Vanessa, but this one is pretty good.  We fell in love with this piece.

The entire cast were well cast for their parts, especially given the lack of scenery or theatrical makeup.

At the end Vanessa and Anatol move to Paris and leave Erika alone with the old Baroness.  So will she wait quietly alone for 20 years like Vanessa?  I prefer to imagine not.