Mefistofele or Fausts I have Known 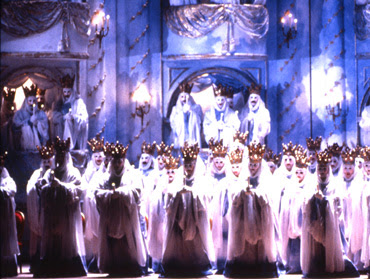 Of the three operas based on Goethe's Faust only Boito's Mefistofele goes on to include material from Part II, ending with Faust's salvation.  Faust's bargain is that if he sees something he finds beautiful, he will ask to stay in that moment and lose his soul.  But it is only when he reaches heaven that Faust says, "This is beautiful.  I would like to stay."   He wins the bet.

This opera was a failure and really only came to prominence when it became a vehicle for Samuel Ramey.  In fact I've seen this production twice before, in 1989 and 1994, both times with Ramey.  I wasn't sure until they came to the scene where Faust seduces Margherita, staged here with a large raised circle in the center of the stage.  A woman sits next to the circle peeling apples, and then suddenly gets up and starts turning a crank that makes the circle rotate.  Memorable.

This time we have:

It's a very silly opera but highly entertaining.  My friends all loved it.   Ildar Abdrazakov is cute but not the towering figure Sam Ramey was in the role. 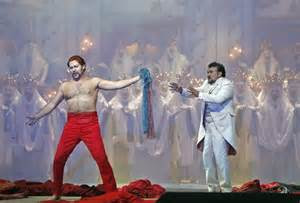 There was an honest to god Walpurgis Nacht such as I have never seen before.  I should have brought my birdwatching binoculars because mere opera glasses were not sufficient to tell if those actually were naked men on the stage.  (Avoid all sentences using the word dong.)  I thought perhaps it was an homage to the recently deceased Lotfi Mansouri who was famous for bringing lots of nudity to SFO.  I hope so.  At intermission we immediately began talking furiously about Mansouri's The Fiery Angel with almost nude acrobats and fully nude strippers.  I talked about bringing my binoculars for the rest of that season to search the back rows of the chorus for nude women.  And yes, I found some.  What a great season.

I can't think of anything sensible to say about this.  Patricia Racette was great, and is spending all of her spare time rehearsing Dolores Claiborne for the opening next week.  The chorus work was outstanding.

a friend who volunteers backstage advises (and supplies photos to "prove") that those are nude suits. liked your comments--interested to see what you say about Dolores C. hard to imagine a story darker than that one (we saw the premier this evening, without having read the book or seen the movie).