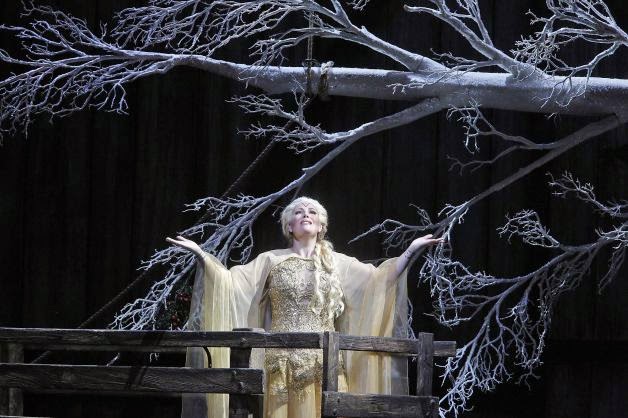 PLACE AND TIME: Gaul, during the Roman occupation in 50 BC.  Attributing it to the mythical time/place of Game of Thrones came from the program.  I think it fits.  This is a new production, I think.  In the grand tradition of the San Francisco Opera they never say "Production xyz."  They name a director, a set designer, a costume designer, etc., but not a producer.  We know, for instance, that Show Boat was done in a production by Francesca Zambello, but nothing in the credits tells us that.  The director is the person who moves the actors about the stage, not the production designer. 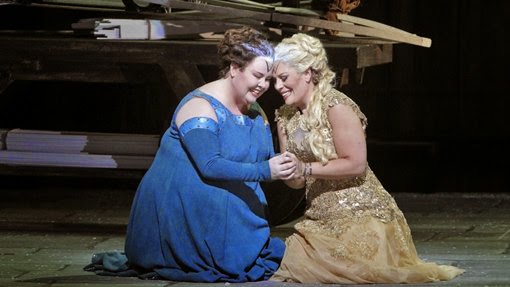 Throughout the opera we had been seeing bits and pieces of this statue, including miniatures of it.  Shrug.  I didn't mind it.

In the line to the ladies room it was said that Marco Berti, who played Pollione in the first 2 performances, was fired.  I have no personal knowledge one way or the other.  The last time he appeared in San Francisco I gave him advice, and I wanted to know if he had taken any of it.  The ticket taker and elevator operator both said that Russell Thomas was better.

Sondra Radvanovsky has the weight and significance as an artist to convince us that she is the exalted priestess of the Druids.  She is very fine in this role, conquering it in spite the monotonously slow tempos that dragged every phrase.  Is this the official Bellini tempo?  Apologies.  CB's Norma has not yet passed out of my consciousness.

Jamie Barton.  Welcome to San Francisco.  We loved you.  Please come back as often as possible.

You saw Tuesday night's performance, yes? us, too.
We had also seen a dress rehearsal, thanks much to mutual friends, and "our" Pollione was approximately 6,000x better than Berti.
We thought Jamie Barton was superb.
As to Sondra Radvanovsky--I'll concede that she's the belle canto soprano of our time (not that I entirely understand what that means...). When she went to the top of her range pianissimo, her sound was gorgeous; when she went up there fortissimo, late in the evening, it was pain-inducing....well, to me, anyway.
the stage business with the bits & pieces of the idol being assembled seemed, um, silly--and I agree with you about the tempi.

She had a couple of really quite frighteningly loud high notes. I said "whoa" out loud.