Susannah by Carlisle Floyd, presented last night at the San Francisco Opera, is very loosely based on a story from the Apocrypha, which is a set of Biblical texts found in the Catholic Bible but not the Protestant one.  This story is known to most educated people today as an excuse for paintings of nude women, such as these: 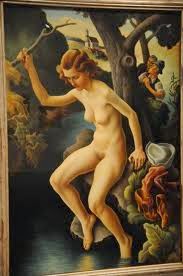 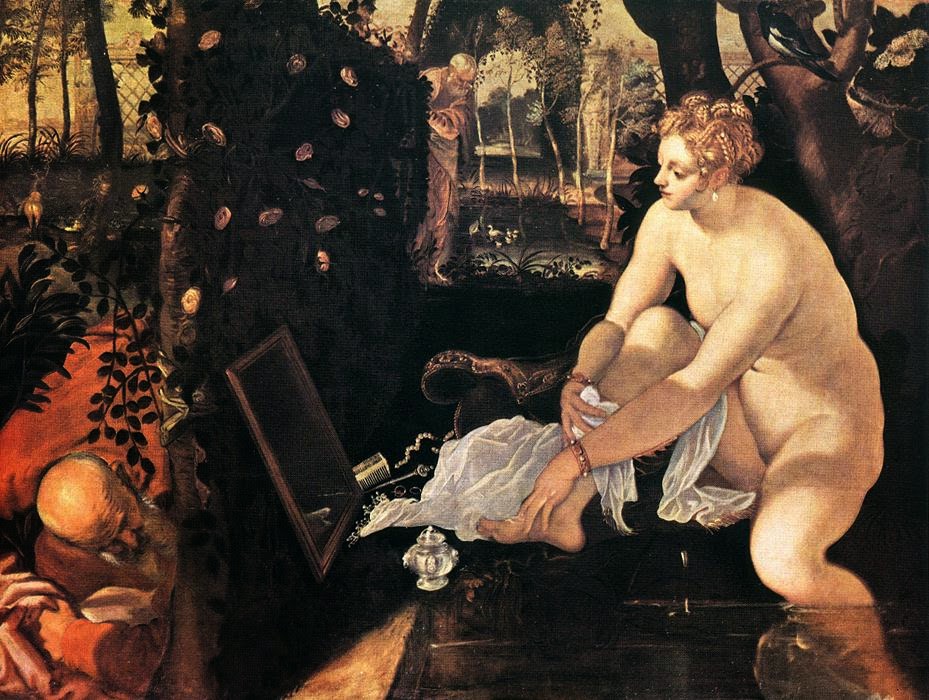 Benton's painting is from the de Young while I think I prefer the Tintoretto.  There are a lot of examples to chose from.  In the Bible story Susannah, a married woman, is bathing naked in her yard while in the background a couple of ugly old men are ogling her.  In the Biblical version, usually called Susannah and the Elders, it is the ugly old men who die.  The opera story is more complicated.

That's right.  A woman conductor.  Is that a first for us?  She looks a lot like Nicole Paiement, conductor of Opera Parallèle.  She made a point of shaking the prompter's hand at the end, generally a sign that the prompter was needed.

You are beginning to wonder if I am avoiding talking about this.  The opera plot is of a reasonably happy young woman whose life goes from one misery to the next.  She bathes nude in a creek behind her house, as she has been doing for months, and the Elders discover her while they are searching for a place to baptize.  The itinerant minister who takes her to bed is shot.  Her brother is arrested or flees.  At the end she is alone, and the Elders have suffered no losses at all.  She talked about leaving so we can imagine that she leaves New Hope Valley, Tennessee, for the greater world.

It's an opera about us, a subject that suits very well the present state of our country. It was well done.  The words, music, costumes and sets evoked the time and place.  One scene moved smoothly to the next.  The all-American cast made the atmosphere quite believable.  There are arias in an American vein.  There is wonderful chorus.  The entire cast is excellent.

And there is Patricia Racette who can do anything, apparently.  She is the most American of opera singers who projects incredible realism in everything she does.  The emotions always seem real in this all too real story.  For me it was too close to home.  In spite of this I shouted with the rest of the audience.