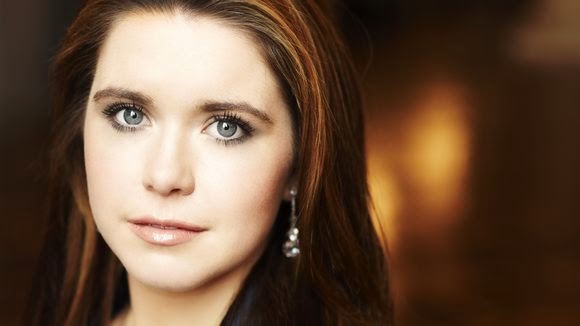 Soldiers, guns, bombs - and now the Munich Opera: an encounter with the Irish mezzo-soprano Tara Erraught. by Mirko Weber [Translated From Die Zeit, Sept 25,2014.  For background on this singer see here, here, and here. ]

Too feminine for pants roles? Tara Erraught can only ignore a debate like this. © Christian Kaufmann

There are singers in Ireland - sometimes vocal cliches - almost as many as the sand on the sea. Truly successful, next to Gilbert O'Sullivan, Sinead O'Connor and Bono, in the first rung are really only three: John McCormack, Catherine Hayes and Ann Murray. McCormack, born in 1884 and a real competitor to Enrico Caruso, was a glittering figure. He owned countless race horses, had a dozen Rolls-Royces, and despite all the worldly fuss felt most comfortable with folk tunes. It was McCormack's "typical Irish ability, to tell a story in song," which make him unique, wrote entranced Henry Pleasants in the standard work The Great Singers.

Of all these Tara Erraught, now 28, knew absolutely nothing, when she began to sing at ten. Tara Erraught from Dundalk, from the little corner of northern Ireland where only the Atlantic and then long nothing comes, just knew, that you can win more people's hearts with one voice than with a violin. At least if one is a beginner on the violin, on which Tara Erraught then still tried though her parents advised her, "I should just let it go." Erraught sometimes talks like a squeaking string, and, yes, indeed, one can understand the parents.

While Tara Erraught with dark flowing Irish "Os " and "Us" tells in English of her beginnings, she has some of the buildings of the Bavarian State Opera in view. She loves the house. In the auditorium namely shines the Munich Opera, unlike other houses, almost like velvet. Tara Erraught can see if someone before her becomes drowsy. And then? "Then I sing him awake," says Erraught whose laugh can almost shake the walls. Now she sits between these walls in Munich, walls that she still cannot quite believe in.

During the teenage years in Dundalk the Erraughts went again and again to Northern Ireland, to concerts, rehearsals, performances. Mama drove well, in spite of the hazardous undertaking. In this way, says Tara Erraught, has she learned to deal with states of emergency: "Soldiers, guns, bomb threats - all not without." [?] However, Tara Erraught knew at age 13 just as well that it should be opera and only opera in her life. A trip on holiday led to the Arena di Verona: Aida, her first complete opera evening as listener. " And that was it."

This article is from the current issue of die Zeit, which you can purchase online or at a kiosk.

Everything great starts with a little kick. The rest is a lot of practice, talent and luck. And wait for the right moment. Through her teacher Veronica Dunne Tara Erraught came to the Royal Irish Academy of Music, but right in the lesson she went afterwards. In 2008 she auditioned in Munich, was taken and overnight was on her own, in a strange city in a foreign country and in a foreign language." That was a hard time," she says today and doesn't want to sugarcoat anything; but somehow it was also the best time. Because Tara Erraught, was included in the Opera Studio, the young blacksmith of the National Theatre, learned to know the operation by heart, as a mechanic his engines. At first she hardly left the opera at all, studied from the lower machinery up to the cloakroom attendant in the gallery everyone and everything. And heard alongside the profound education - "nowhere it can be better than here" - so much repertoire as she could get.

There was from the beginning something special in that voice, a youthful, almost always ready to smile and to convince as mezzo-soprano, with which Erraught five years ago first made her debut as Cherubino in Mozart's Figaro and began, as is the Irish way, a story to tell: What came from the heart, could easily go to the heart. Here spoke not the innocent from the country, but one that lived close to the origin of the music, as natural as it went. And no one slept.

Her breakthrough, however, Erraught had two years later, when she stepped in for Vesselina Kasarova in Bellini's I Capuleti ei Montecchi. Nikolaus Bachler, the chief, had asked, in dire need: Could she be trusted? Erraught learned the Romeo in five days, put honestly, at the premiere came "a little Italian filler from the imagination" - and made it through. Glorious, it must be said. She sang Kasarovas series to an end - and found herself catapulted into a world in which you say "Hi, Anna" (Netrebko) and "Hello, Jonas" (Kaufmann ). "Awesome", logically, but also a bit "strange, Erraught finds.

It was the time when many after the great early success make the first major, fatal mistake. Erraught, however, trusted the right agent, Jack Mastroianni, but above all herself and her giant Irish family who keep her "grounded, if that is necessary. She knocked out the big Bellini and Donizetti roles that were already within reach, and strengthened her voice with Mozart and Rossini: Rosina and Cenerentola, Sifare in Mithridates. Mozart's Zerlina and Elvira, that can also be sung by a mezzo, were desired roles.

Erraughts career has skyrocketed, while she still is working on the fundamentals. Also, this may contribute to a down to earth attitude, emphasizes this major talent. Who on one hand sings supporting roles (Hansel in Humperdinck, Sesto in Tito) and on the other with enthusiasm sings the kitchen boy in Rusalka, the Second Lady in The Magic Flute or the voice of the unborn child in Frau ohne Schatten, is simply less likely to crash.

On the other hand, she knows very well how disrespect works in her profession. As she made her debut this summer at Glyndebourne, not in Munich, with Octavian in Strauss' Rosenkavalier, she was met with a wave of contempt from many UK papers. She was accused of being too bulky for the role, which in turn drew a discussion about why the figure will always be made an issue of only with girl singers. The stupid result of a male-dominated music criticism? Tara Erraught has the debate, as she says, largely ignored. She knows that she is no elf and doesn't want to be one. In Glyndebourne she knew that she was obligated to Richard Strauss, Hugo von Hofmannsthal and the play. She sang, without fear. Fear on the stage is the worst adviser. But she sang very well.

Now she stands before the next fork. In the fall she debuts one after the other in Strauss’ Die schweigsame Frau und Janáčeks Die Sache Makropoulos, and at the Opera House in Washington, she is recognized as Angelina in La Cenerentola. At the same time Tara Erraught works - regularly with Brigitte Fassbaender now - on Lieder programs. Moreover, she remains, despite a Bavaria as a friend, Irin, she of course sings Danny Boy as an encore, "oh Danny boy, the pipes are calling", an ancient, ever new story. At Bayern Munich and Tara Erraught likes best, that on Sunday everything in the city is quiet and people meet for coffee and cake. "Fine," she says, that "nothing is happening". Break. "Except for opera in the evening!"

[I found this article charming and couldn't resist translating it.

The magazine Opera for August has a nice article about the Strauss year and an excellent viewpoint on the Erraught scandal.]
Posted by Dr.B at 10:44 PM