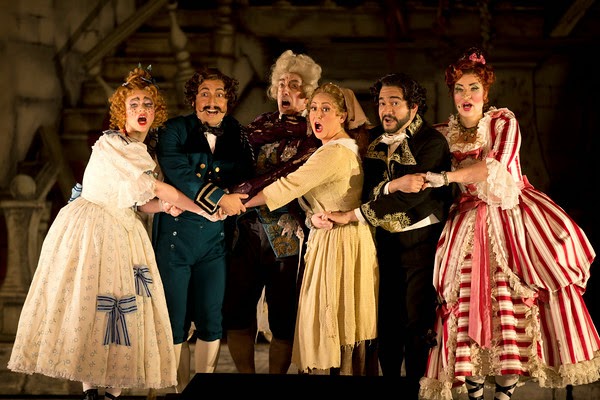 I see in the credits by the San Francisco Opera that the production is credited to the great Jean Pierre Ponnelle.  Sometimes one wants to see Rossini's La Cenerentola in a truly old fashioned production.  I noticed, for instance, that Don Magnifico is dressed from a few decades earlier than the rest of the cast.  This is maybe his only dress up outfit.

Original touches in this performance included a dancing Clorinda who could actually go on point even while singing.  That was a first.  In their original meeting Angelina and Don Ramiro did a little smooching.  It was staged this time with a lot of comic business, especially by the step sisters.

Only Christian Van Horn was someone I had seen before in this outstanding cast.  Clorinda, Thisbe and Dandini are Adler Fellows.

The star of this opera who gets 3 big arias is actually Don Magnifico, sung here by Carlos Chausson, a singer with a big booming voice. In any other time the Don Ramiro of René Barbera would be considered magnificent.  There is just so much competition these days.

Karine Deshayes was charming and sang well.  If you have not seen La Cenerentola, this is a good choice.  And maybe even if you have.

Another kind of review: "We also had young girls in the orch ring seats. At first there was shushing but when we realized these were enthusiastic kids, aw, what the hey. The look on the girl's face right behind me when Cindy shows up in the white ball gown, WELL! Total rapture. It was just charming. During the standing O she just stared,agape, the whole time. Maybe she just made a lifetime moment- sure hope so! KC"