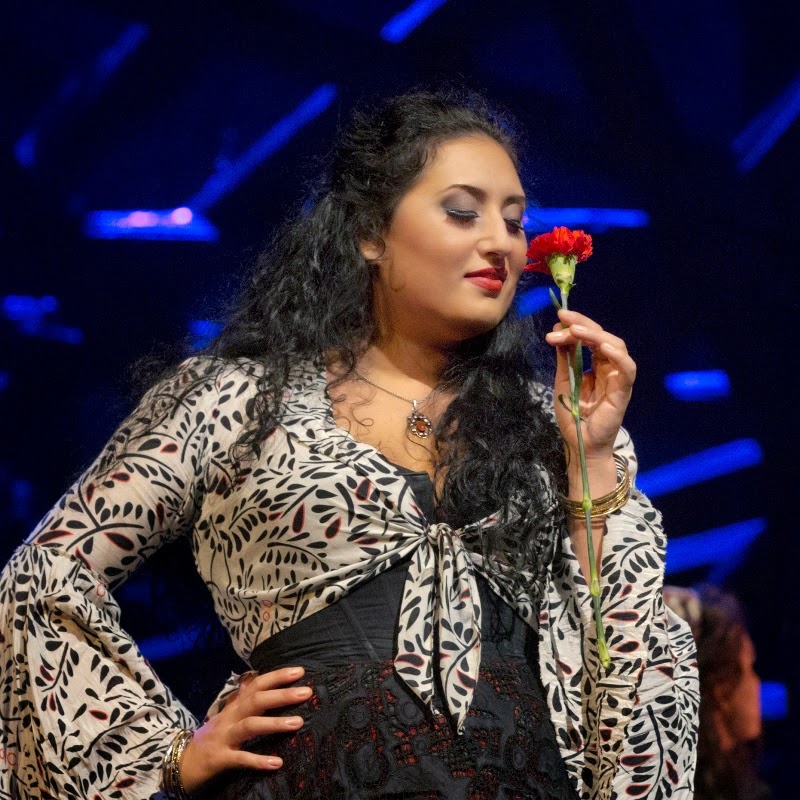 Carmen isn't really a role for Anita Rachvelishvili.  She just sort of is Carmen.  She dances.  She washes her legs.  She flirts with everyone, even the ones she rejects.  She rolls around on the floor.  Yes, I know, we've seen all this before, but it just doesn't seem like it.  She is a natural, and even the voice is perfect.  I enjoyed her performance enormously.  We are discussing Bizet's Carmen live in HD from the Metropolitan Opera.

The Micaëla of Anita Hartig was excellent.  We were supposed to see her last season as Mimi when she called in sick.  I hope we get to see more of her.

I liked very much everything about Aleksandrs Antonenko's Don José, especially the dramatic parts in the second half, except the "Flower Song."  That has to be the worst "Flower Song" I've ever heard.  He wavered off pitch and seemed generally unsteady.

I liked the production again.  I think it works, though it makes the stage seem smaller than it is.  The conducting was enthusiastic, but he didn't seem to be good at coordinating the ends of arias with the singers.  They generally went ahead without him.

Our theater was pretty crowded.

P.S.  It is good to talk about Carmen.  It is an opera about men behaving badly.  I liked it that in this performance there was a man who stood at the top of the steps to help the women of the chorus climb out of their cellar.  It seemed very polite, even though he hugged and flirted with them.  Carmen didn't need this.  She strides out on her own.

Micaëla cringes from the soldiers grabbing and touching her, and remains basically unharmed by them.  When she is through with them, Carmen just pushes them off and insults them.  This turns out badly for her, and I won't actually say that she brings it on herself.  But she does seem to believe in her bad cards that predict her death.  Deep down she doesn't believe there is anything that will prevent her fate.  She knows that Don Jose will kill her.  She is Carmen and wishes only to be true to herself.

Carmen is a modern woman in a not modern world.  She insists on loving as she wishes, openly, rashly, passionately.  She does not allow herself to be controlled.  This production shows her as she is.  Two wonderful performances of profoundly contrasting emotions, Garanča and Rachvelishvili, show the complete spectrum of Carmen.  I warm to her as I have not done in the past.  She is not a fool.  She is powerful in the face of all.

I'm not sure I've ever heard a "Flower Song" done really well. Maybe it's really hard to sing? It's one of the few (only?) arias in the repertoire without a repeat -- goes from A to Z.

This production also featured two of my favorite Met regulars in supporting roles: Keith Miller as Zuniga and Eduardo Valdes as Remendado. Also, the guy who sang Dancaire (Malcolm Mackenzie) was terrific. That's one of the things that makes the Met great; they have great "bench depth" when it comes to those secondary roles.

I was just gonna say...yes, the Flower Song is difficult and I yes, I have it sung well, most recently by Jonas Kaufmann, who really makes the most of it musically and dramatically - it's the high point of the act.

I enjoyed the HD. Love the production and agree with Doc about most everything except Antonenko - DJ is just not his role, not enough dramatic intensity, too little dynamic shading, not enough color in the voice for me... though once past the awful Flower Song he got better in act 2. Despite reports to the contrary, I thought Rachvelishvili was excellent as Carmen.

I certainly wouldn't prefer AA to some other people. He might make a good Otello though.

As time has passed on this performance, I find that I still like the Carmen very much. She gives the role a large personality which for me represents Carmen. When I reconsider the whole cast, I realize that it pales in comparison with the Garanca -- Alagna performance which was simply spectacular. The chemistry was perfect.