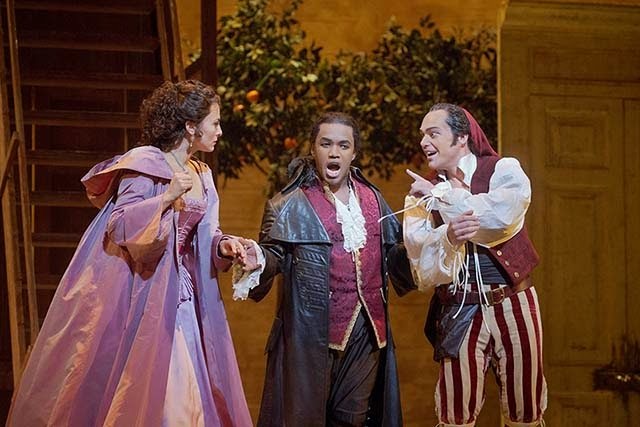 While watching the simulcast from the Metropolitan Opera today, I noticed for the first time that in the storm scene where Figaro and Almaviva attempt to abduct Rosina that Rossini uses the same orchestral figure to depict lightning that Verdi uses in Rigoletto.  In Il Barbiere di Siviglia it's just a brief fragment of flute arpeggio that turns into a louder, more stereotypical orchestral storm as the scene progresses.  Verdi expands it into a long scene, but it's the same figure.  I expected to see flashing neon, but alas I did not.  If the storm scene in Rigoletto does not remind you of neon flashing, you do not attend enough Met simulcasts.

My seatmate pointed out that the staging is now less busy.  Perhaps there are fewer stagehands.  I have often pointed out that reducing the number of stagehands would save a lot of money.  I noticed that in one scene the girls surrounding Figaro's movable business pushed it off the stage.  In another there is a donkey, Sir Gabriel, who was interviewed during the intermission.  Debbie Voigt seemed quite fond of him.

It also seemed to me that previously John del Carlo and his silent shadow carried the burden of the comedy while here it was more evenly distributed around the cast.  Maurizio Muraro is a fine singer, but he is no comic.  Christopher Maltman was an appealingly lively Figaro.  There needs to be a reason the opera is called The Barber of Seville.  Figaro must seem to plot every move.  I have seen this idea more effectively carried out elsewhere.

I need the lovely singers Isabel Leonard and Lawrence Brownlee to pay more attention to each other.  This is not a criticism of the amazing Mr. Brownlee, but the Met's inclusion of the great tenor aria at the end completely overbalances the opera away from Figaro and Rosina.  Isabel Leonard is charming and effective.

I enjoyed it.  I've been enjoying a lot of things lately.