La Bohèmes I have Known 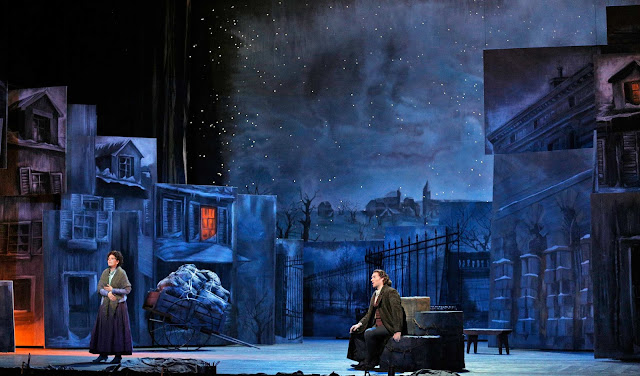 I certainly don't mind seeing Puccini's La Bohème, seen last night at the San Francisco Opera, over and over, but I don't have anything new to say about it.  Leah Crocetto has a bigger voice than the average Mimi, and as a result I heard her in the Cafe Momus scene.  I don't think I even noticed Mimi there before.

I liked the production, especially the fast scene changes.  If you've ever been to Paris in the winter, you know that it's rather dark and drab.  The drabness improved the atmosphere of this piece about intense poverty.

Opinions about the conducting were all over the place.  It was ok, but I've heard better, though not from most of the list below.  I don't suppose Beecham will come back.  I would prefer that conductors took this piece more seriously and raised their expectations.

The singing was very nice indeed.

Since I began blogging, I have reviewed versions of Puccini's La Bohème listed below.  Only the Zeffirelli production is a repeat.  None of these were my first La Bohème which may possibly have been Pavarotti and Freni in San Francisco.

Wednesday, May 18, 2005La Bohème -- the glorious recording with Björling and de los Angeles.

Saturday, April 05, 2008Surprise in HD with Gheorghiu and Vargas in the Zeffirelli production.

Sunday, October 04, 2009La Bohème the Movie with Netrebko and Villazon.