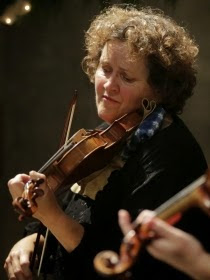 The American Bach Soloists, who generally play in a church in Davis, are my favorite group in the greater Sacramento area.  They did not fail to please.

There were two actual Italians on the program:

Nisi Dominus by Vivaldi, a psalm setting in Latin for alto, and
Concerto in A Major for cello by Leonardo Leo.

You can tell the Italians are beginning because all the wind players have left the stage.  The first piece is like a cantata without the recitative.  One of the movements includes a gorgeous solo for viola d'amore played beautifully by the star of ABS, Elizabeth Blumenstock.

The cello concerto involves a lot of detailed, even virtuosic ornamentation, much like an Italian opera.  Kudos for Gretchen Claassen.

Everything else was by Bach.  They began the concert by announcing that the first and last Bach pieces would exchange places on the program.

Gott soll allein mein Herze haben was a cantata by Bach for alto.  This work ended with a chorale sung by the audience, by now an established tradition with ABS.  Jeffrey Thomas said that we sang it best.  He said, "We predicted that Berkeley would sing it best," and the audience booed.  We are in the home of UC Davis who do not wish to take a back seat to Berkeley.  As countertenors go, Ian Howell is acceptable.

It soon became clear why Bach's Concerto in D Minor for two violins was placed at the end.  This is a very flashy piece and the most familiar item on the program.  Elizabeth and Cynthia were wonderfully spectacular and received a roaring, shouting ovation at the end.  I pretended I was at the opera.