Mahagonny from the ROH 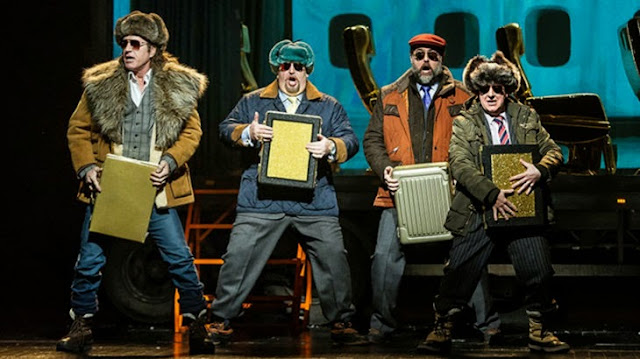 There were some odd features to the film from the Royal Opera in London of Weill's The Rise and Fall of the City of Mahagonny.  There was a blackout in London that night, so the lighting wasn't exactly normal, but from our perspective it was hard to tell exactly how different it was.

The three gangsters arrive in a semi which breaks down.  Leocadia, who is apparently in charge, decides to set up a city here.  She names the city Mahagonny and tells us this means spider web.  A semi container makes a great set, so this is what we see throughout the opera.  When the semi first opens, it is full of prostitutes.  Jenny sings the Alabama Song.  It makes sense that we would be in Alabama.  The gangsters are fleeing from Tallahassee.  It's supposed to be a desert. Attn. Europeans:  there are no deserts in the south eastern part of the United States.

Four lumberjacks arrive and see Mahagonny as a place where they can spend their money, earned from 7 years in Alaska.  Jack O'Brien eats himself to death.  Alaska Wolf Joe gets into a fight with Trinity Moses who then kills Joe.  Jimmy has bet all his money on Joe and loses.  Bill is too smart for this and is the only one left with any money.

This brings us to the moral of the story:  the worst crime is not having any money.  Jimmy is executed for this.

They left out the third verse of the Alabama Song "Show me the way to the next pretty boy."  They only included the verses about whiskey and money.

The singers in Los Angeles were much better suited to their roles.  These were fine, I guess, and included the great Willard White.  So how can I complain?  It was fun to watch Anne Sophie von Otter.

They executed Jimmy standing with his arms outstretched so he would somewhat resemble the life-sized crucifix that later appeared.  Do we really need Jesus here?

Not quibbling:  this was presented in English with subtitles--I still haven't seen it in German--with a translation by Jeremy Sams.  This is the same guy that provided the text for The Enchanted Island and translated Merry Widow at the Metropolitan.  He has been richly criticized for the Merry Widow translation, but I liked him here.  The text was very straight forward, even blunt, which seemed suitable.  I ended the performance feeling that I finally completely understood this piece.  The only question remaining is did I really want to?

First is food, then comes sex, then fighting, then drinking.  Nobody seems to die of sex or drinking.  The moral of this seems to be that humans cannot be trusted.  I don't find humans to have a good track record but I don't think there's an answer.  Unless maybe you mean Switzerland.

That's an articulated lorry to you. You thought I didn't know that.