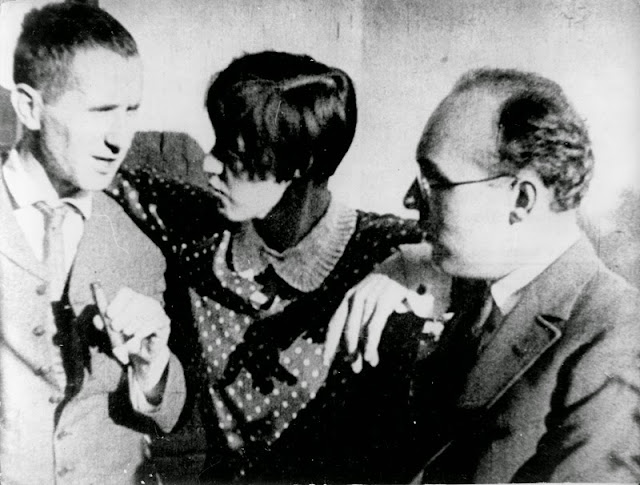 Prior to our entry into WWI America may have held little interest for Europeans. I was in London for the American bicentennial in 1976 and was fascinated to see them focusing on the British politicians whom they held responsible for the loss of the colonies. Our American heroes meant nothing.

So we came into WWI for about a year and ended it. The Tsar was gone. The Austro-Hungarian Kaiser was gone, the German Kaiser was gone, The King of Italy was gone. Life in those parts of Europe was completely changed into a raging political turmoil. Suddenly the Europeans were obsessing over things American, including American music. Jazz was heard in Paris. Jazz was also heard in Berlin where 18 year old Kurt Weill went to study music with Ferruccio Busoni among others.

Weill was fascinated with the theater from the beginning, and in Berlin he found himself surrounded by political movements promoting the use of music in ordinary life.  He sought out Brecht because of his Mahagonny poems, thus beginning their extraordinary collaboration.  He hitched his wagon to a star, as we say.

I knew about Weimar era Berlin from Cabaret and Christopher Isherwood, but I didn't know Berlin was a major central part of Europe, in some ways for the first time. Kurt Weill is the European composer closest to American idiom, bringing us a European vision showing elements of jazz style. He is known in musical theater circles as one of the few composers who did his own orchestration.  His orchestra emphasizes winds much like the orchestra for an American musical.  In Berlin he was exposed to American jazz and clearly adapted his ideas to suit it, but it would be a mistake to say he is imitating.  He used zithers, for instance, and what American orchestrator would score for a badly out of tune piano?

The list below is of Weill's works which were written in collaboration with Bertolt Brecht, an association which lasted from 1927 to 1933 when Jewish Weill fled Germany.  I find that I don't want to write about his American period and will focus on these.


The year of the premier tells Weill's age, while Brecht was 2 years older and had far more completed works for the theater than Weill had when they met. Weill initiated the contact. He had read Brecht's Mahagonny poems and wanted to set them to music.

What is interesting in the above list is the appearance of the name Elisabeth Hauptmann. I believe that her share in the creation of Brecht's ouvre has only recently become known. It should be added to the above chart that it is she who would have translated The Beggar's Opera into German for Brecht. We will probably never know how much of Brecht is really Hauptmann.

The success of these works varied absolutely. Mahagonny Songspiel was a one time performance to fulfill a commission. Die Dreigroschenoper was a raging success, settling Weill's finances.

Happy End crashed and burned after only 3 performances. This was in no way the fault of Weill. Brecht was discovering Marxism at the time and the characters spent the third act reading the communist manifesto and ranting about Marx. The middle-class audience didn't care for this at all.


For Weill the full length Mahagonny was always the goal of their partnership. It is also the goal of my current delving into Weill, since The Rise and Fall of the City of Mahagonny from the Royal Opera will play in a local theater here in a couple of weeks. I have previously seen this work in the Teresa Stratas version and the version from the LA Opera with Audra McDonald, both in English. The German version on line is audio only. The Mahagonny opera was also a hit. The Alabama song is always in English, even in Mahagonny Songspiel..  Like many musical works in the 20th century, it was conceived as anti-Wagnerian.  You should be intellectually stimulated or best of all alienated, and not hypnotically swept away.

Die sieben Todsünden [The seven deadly sins] and the rise of Hitler arrived at the same time. After it played in Berlin, Weill fled, first to Paris and later to America. This work is one of his more performed pieces. This is the one where sister Anna I sings and Anna II dances, like the evil step sisters in Rossini's La Cenerentola, probably a coincidence.  The result is a ballet with singing.


Brecht eventually realized that Weill had succeeded in completely dominating their partnership in the only place where it mattered--in the works they had created together.  I should perhaps stop trying so hard to understand it and just enjoy.  I'll see what I think after the showing.

I think I've got it.  After much thinking and reading, I think I understand my difficulty with Brecht.  He wants alienation and a complete lack of identification with his characters.  The problem I'm having with this is that when 3 crooks stop their truck in a deserted place and create a gangster city, I see America.  As an American, this is normal life.  How can I be alienated?