Elektra Night at the Museum 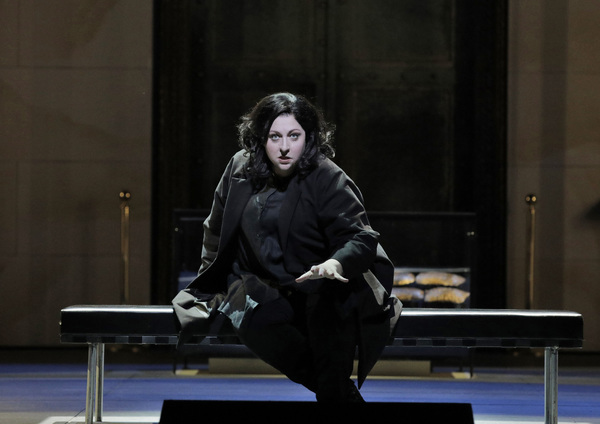 Last night I attended a San Francisco Opera performance of Richard Strauss's Elektra.  I have been going here for all of my adult life and can think of only one comparable performance--Die Frau ohne Schatten, also by Strauss, in 1980 with James King as The Emperor, Leonie Rysanek as The Empress and Birgit Nilsson as Barak's wife.  My soul is larger.  Everything that needs to be said has already been said about this, but I will have a go anyway.

In the recent past was another night at the museum production, of Il Trovatore with Anna Netrebko from Salzburg, but the exhibition seemed without a theme and incoherent.  Here we have what seems to be an exhibition of artifacts from Mycenae, the Greek culture which launched the Trojan War.  The house of Atreus with Agamemnon, Klytemnestra, Iphigenia, Orestes and Elektra are the central figures from this culture and appear through history in many art forms.  It is entirely plausible that an  exhibit devoted to physical objects from this time would take place.  Many of these objects appear in this production.  So we have a far more plausible intermingling of the ancient and the modern.  When they speak of Agamemnon, a man wearing the death mask said to belong to him appears.  We believe this.

Christine's character is always clearly a modern person who is projecting her life and family onto these historical figures.  We see this most clearly when this kitchen appears: 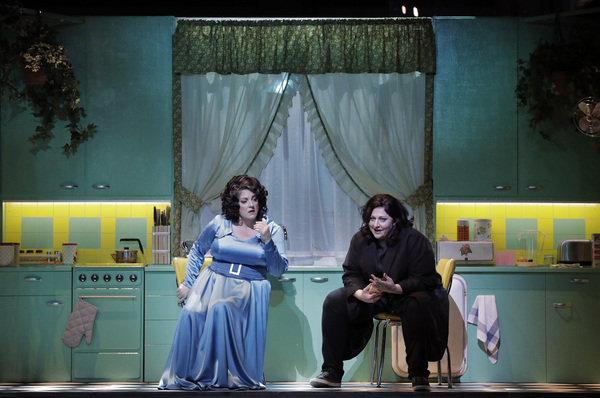 We exclaimed to one another, "My mother had a kitchen like that."  The time travel was handled very smoothly.  This is clearly a very successful concept regie production.  All the other characters have dual identities and appear in modern and ancient clothing.  Other productions for this opera I have seen recently have all the main action take place off stage.  Here the deaths occur before our eyes.  It is intense.

Musically I found this to be a triumph.  The three women--Christine Goerke, Michaela Martens and Adrianne Pieczonka--were performed by three big voices in glorious fashion.  The biggest surprise was in the music.  It wasn't that long ago I was bemoaning the death of great Strauss conducting.  Henrik Nánási has shown us the way back.  It was the best Strauss I've heard in years, and it was by our San Francisco Opera orchestra.  Bravi.  Because the screens were turned on, I noticed that the orchestra stood immediately when the maestro came out for his final bow, turned toward him and applauded.

It was a colossal, towering performance on every level.