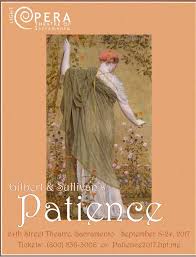 Friday night began the run of Gilbert & Sullivan's Patience from the Light Opera Theatre in Sacramento.

This show is all about outfits.  Dress like people from ancient England, and you will be perceived as a poet and adored.  Dress like a modern person, and you will disappear into the crowd.  Suitable young women pay no attention to the suitable young men in the Dragoon Guards and instead go off pining after silly poets in old fashioned outfits.  The young women wear old fashioned outfits too and sigh and moan.  There are patter songs.  Irrelevant names are tossed about.  Francesca da Rimini.