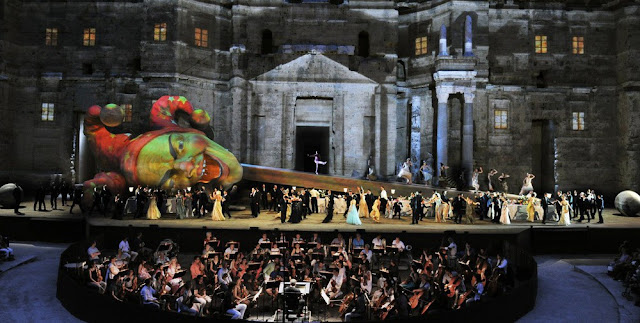 I have not traveled this summer for reasons relating to health and money.  I don't count driving to San Francisco as traveling.  In spite of this my opera cup runneth over.  There has been some pretty spectacular stuff here.  New for me this summer are The Chastity Tree, Artaserse, Oberon, and Theodora.  It is important to notice that all four of these are older operas.  In fact Wozzeck is as close to a modern opera I have gotten this summer.

I have decided to limit this essay to performances originating this summer in Europe.  That eliminates live performances seen in the Bay Area:
It also eliminates reruns from the Metropolitan Opera in HD:
All the rest are from Europe. There were some older performances I watched on film to broaden my education and catch a glimpse of some favorite singers:
I generally watch European opera to see what is happening now, but these historical performances were worth the time.

That leaves ten performances from Europe that took place this summer, including two traditional productions viewed for the singers rather than the productions:
In a wide range of shocking to ordinary the following list of the eight remaining operas includes some very famous directors.
One pair of productions identified for us a new cultural villain:  the clinical psychiatrist.  I rather agree with this.  In modern democratic societies there remains only one absolute monarch:  the psychiatrist.  His power is greater than anyone else's.  He can have you put away or imprisoned on his word alone.  People go along with what they say primarily because they have no idea what they're talking about.  So two different directors have taken two different operas, removed the original spoken dialog they came with, invented new dialog and created entirely new stories.
These two changes are shockingly similar, even though they come from different countries and different directors.  I think this is the kind of modernization people object to most.  Can Oberon be saved?  Perhaps not.  But if this is the only chance you get to see it, maybe sticking closer to the plot would be better.

The final operas to consider are two magnificent productions of Mozart's great opera seria La Clemenza di Tito.
It was an amazing summer.
Posted by Dr.B at 12:55 AM

Email ThisBlogThis!Share to TwitterShare to FacebookShare to Pinterest
Labels: +100, Europe, Opera Only, Writing