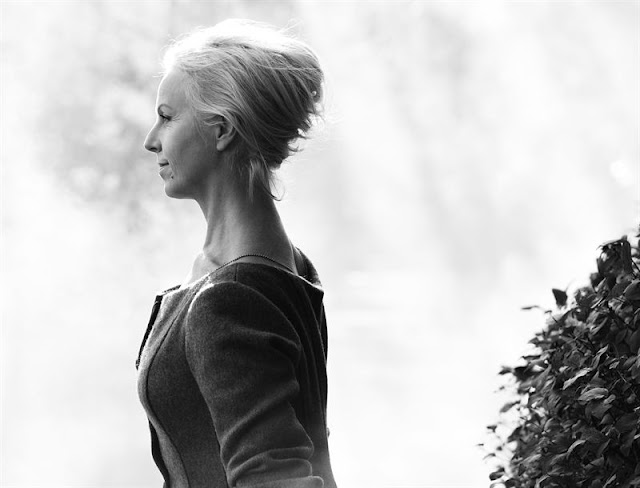 Autumn Sonata was a 1978 Swedish film by Ingmar Bergman, and now it is a Swedish opera by Sebastian Fagerlund with libretto in Swedish by Gunilla Hemming. It is being presented by the Finnish National Opera and streamed over Operavision.

The family is introduced in modernist music, and then we shift to a recital.  The audience ask one another if they have heard her versions of Beethoven's Pathetique or Hammerklavier Sonatas.  She doesn't play, but the audience remains.  Mother Charlotte is returning to see her children after 7 years on tour.  The family live in the country where it is autumn.

Charlotte tells her daughter that she bought her pantsuit in Zurich on Bahnhof Strasse.  I picture this, having been to Zurich a number of times.  Both Charlotte and Eva hold their hands over the keyboard but neither plays.  Anne Sofie von Otter is herself a great lady and easily creates the aura of a famous person.  The audience stays on stage throughout the first scene, but eventually a curtain descends blocking them.

In the years that Charlotte has been away Eva has taken Helena, who is mentally disabled, out of the institution where Charlotte left her and is keeping her at home.  This adds an element of madness.  Also in those years Eva and Viktor had a son Erik who has since died.

There is a scene, sort of an aria, where Charlotte gets ready for bed.  She takes drugs and reads the Frankfurter Allgemeine--Germany's most distinguished newspaper--among other things, every night before sleep.  She does her bookkeeping.  Then she lies down with her sleeping mask and the chorus reappears.  They seem more a Greek chorus than an audience.  I rather like this part.

Helena wakes up and begins wailing loudly, waking Eva and Charlotte.  They get into a loud argument.  I've never seen the movie.  Is it about families whining?  They talk at each other simultaneously, one complaining about adolescent worries and the other about career problems.  Is it always like this?  My son as an adult tells me about things he didn't like as a child.  As a child, he said nothing.

Our Charlotte explains that through music she could express her own emotions.  Yes.  I remember saying once that parts of me existed only when singing.  Each is damaged by their own parents and cannot see that they, too, are damaged.

The chorus leaves and the sun comes up.  Helena gets out of bed and walks into the other room.  She sings about a visit from Leonardo and seems quite sensible.  We still hear the chorus which is back to being an audience.  Charlotte changes her mind and calls her manager to book her a concert.

It works rather beyond ones expectations. The atmosphere builds as it goes along to a pleasing intensity enhanced by the imaginative use of chorus.
Posted by Dr.B at 5:55 PM