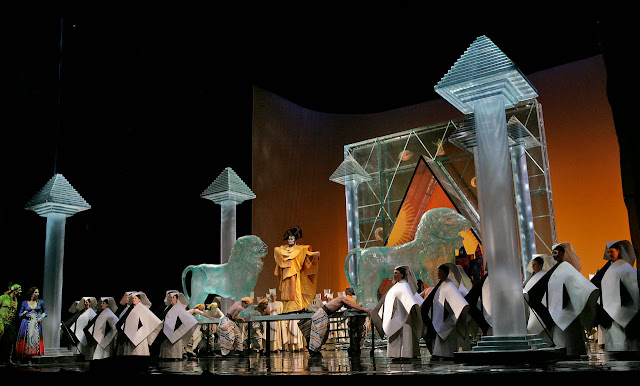 Nadine Sierra was our announcer today for Mozart's Die Zauberflöte from the Met, and she did a fine job.  She has charisma to burn.  Julie Taymor's production of The Magic Flute first played in HD with cuts and in English in 2006 and has replayed since then. This performance was for those of us who love this opera in German.  It was lovely to hear the original words in an uncut version.

It is interesting to me that in his final year of life Mozart wrote two operas about forgiveness.  Die Zauberflöte and La Clemenza di Tito.  Perhaps it was for us.  This is Kurt Moll.  In this holy hall we don't speak of revenge.

Out of the cast listed above, only Markus Werba was completely new to me.  His Papageno was a joy.

Kathryn Lewek was in Cecilia Bartoli's Ariodante which I very much wish I had seen.  She was outstanding here.

Golda Schultz appeared in the La Clemenza di Tito from Salzburg this past summer. Pamina suits her better.

Charles Castronovo has appeared a few times in San Francisco.  My favorite outing from him was Il Postino with Placido.  His voice is robust for Tamino, but I agree with his comments--he enjoys a heroic sounding Tamino.

Everyone knows the one and only René Pape who flew over just for this performance.  He's the best now.

I love the Julie Taymor production and enjoyed seeing it again.