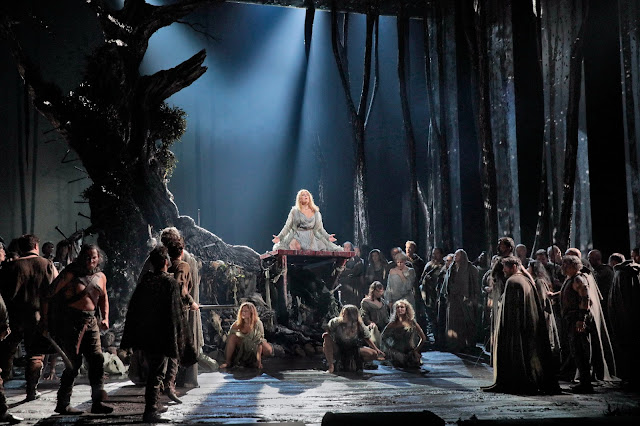 Above is the staging for "Casta diva" from Bellini's Norma live in HD from the Metropolitan opera. The goddess to whom she prays is the moon, so the scene must appear to be moonlit.  This is the greatest complaint about this production, that the sets are too dark.  Our screen was quite large and generally easy to see, except for the very beginning, before the moon-rise, which was almost black.

My Normas have been Joan Sutherland, Montserrat Caballe, Cecilia Bartoli and Sondra Radvanovsky, whom I heard first in San Francisco.  For me this version was best of all for the acting. I loved Cecilia's Norma for this quality, but here it balances across the cast.

We know we are at war by the presence of bodies.  What is to be their position toward the Romans?  Norma recommends reaching a peace with them, but we know that her motives are suspicious.  She probably recommends peace because of her relationship to Pollione, the Roman proconsul.  In the first act religious ceremony Adalgisa assists Norma in the rite. 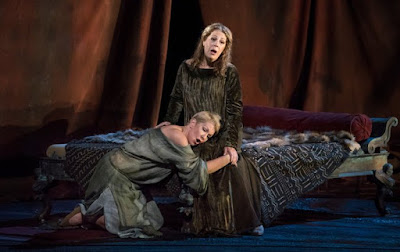 In Norma's house Adalgisa reveals that she is in love with Pollione and has promised to go with him to Rome.  Norma does not reveal to Adalgisa until later that she has two children by Pollione. The increase in the significance of Adalgisa and the increased strength of her tie to Norma changes the emotional dynamic of the opera.

So when Norma calls her followers together again, she recommends war.   We see Norma's range of emotions, especially her rage against Pollione.  She knows someone must die, but is not sure who should be killed.  She finally arrives at herself as the person at fault.  Adalgisa appears at the end to watch her lover and her friend walk off together to their deaths.

Sondra was magnificent, a giant, intense performance still wonderfully sung.  Joyce was also magnificent in both singing and acting.  I even liked Calleja.  When watching the old timers long ago, one hardly knew there was a plot.  Here we get the best of both worlds--a traditional staging with a lot of emotional interaction and magnificent singing.
#ad

Someone posted a picture of Joseph Calleja backstage at Norma holding up a Norma Baerenreiter score which means we have the new critical edition.