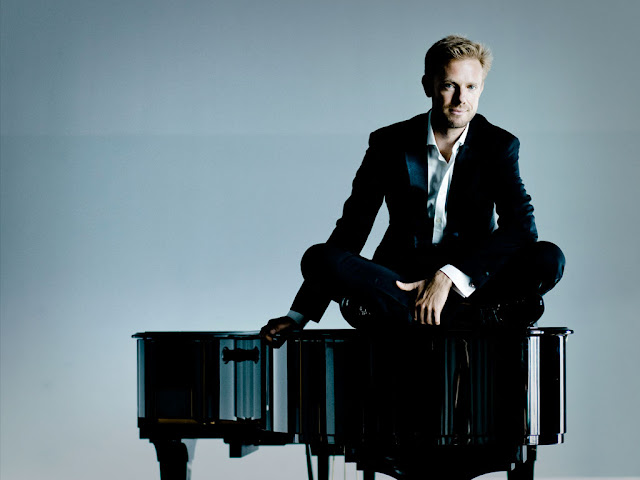 Last night at the Sacramento Philharmonic and Opera we were treated to three major pieces from Russian repertoire conducted by Case Scaglione.

Mussorgsky – Night on Bald Mountain in the arrangement by Rimsky-Korsakov began the concert.  This is supposed to be a witches Sabbath or in short a tone poem.  The Community Center Theater has changed the concert acoustical padding at the back of the stage.  When you combine this with brasses which all point directly out at the audience, you get very loud brasses, particularly in this piece.  Otherwise it's a lot of fun.

I'm going to pause for a second to say that Berlioz traveled to Russia and gave concerts.  He may be said to be the father of the Russian school.  If you listen, you can hear how this might be true.  The orchestral flamboyance in almost all Russian repertoire is the main indication of his influence.

Tchaikovsky– Piano Concerto No. 1 with Andrew von Oeyen, piano, seen above.  He is a lovely, energetic young man with just the right enthusiasm for this piece.  The first movement is so long that the audience thought it might be the end.  The piano, orchestral balance was excellent.

Rachmaninoff – Symphonic Dances.  This is supposed to be Rachmaninoff's last composition.  I have probably never heard it before.  Dances are normally named after a dance, but here they used the usual tempo markings as names.  The first one is called "non allegro" which made me laugh.  One doesn't generally ask what something isn't.  It seemed beautiful but completely unstructured.

This is a difficult program which I found well played.  It was sold out.  The second half is next week.