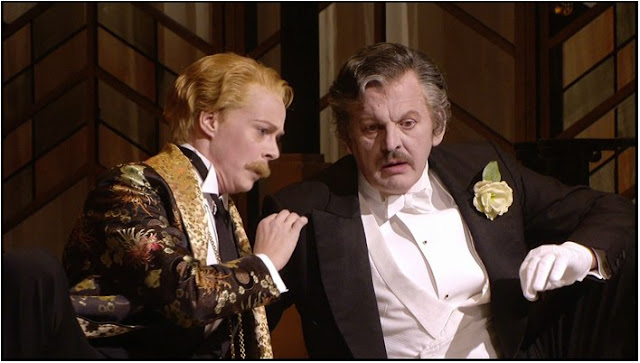 I'm always on the lookout for a good Die Fledermaus in German, and I have found one from Glyndebourne 2003.  The deutsche Ausprache [German diction] is excellent.  It is for a long time commonplace to change the book for Fledermaus.  If you see 3 of them from 3 different places, the story will use 3 different versions of the spoken dialog, and I don't mean because it was translated.  In this version they talk quite a lot, thus the importance of good diction, but they skip the part in act I where Dr Falke personally invites Rosalinde to Orlofsky's party.

This is truly an outstanding cast.  Thomas Allen is perfect for Eisenstein, both as singer and as actor.  He is both affectionate and a bit indifferent toward his wife.  There is a joke where he pretends to be a tenor by tuning his wife's piano down.  He knows she prefers tenors.  I like the Rosalinde very much.  The dialog makes clear that Rosalinde and Alfred were former colleagues in the musical theater.

It is mentioned more than once that Prince Orlofsky is 18 and bored.  Bored is nothing new, but I don't recall hearing how old he is.  And Malena Ernman may be the greatest of all cross-dressers.  Why did I not mention her in my cross-dressing discussion?  Partly because I haven't seen her that much.  She doesn't make it to the west coast.  Did you know she sings Olympia and Queen of the night?  I certainly didn't.  She enjoys very much the theatrical side of opera.  She goes around patting the men on the butt.  Genial.  She ornaments the final verse of "Chacun a son gout."  I don't recall ever seeing that.

The stage rotates to show the entertainment.  Doctor Falke reveals many things to Rosalinde about her husband, all of which she forgives, until he tells her that he is actually not a tenor.  Then she threatens to murder him.  Herr and Frau Eisenstein go immediately to the watch seduction which she already knows all about.  "You may remove my mask tomorrow at breakfast."  He answers "Morgen habe ich andere Sorgen."  [Tomorrow I have other problems.]  One of my favorite lines.  Tomorrow he will be in jail.  She steals his watch and leaves. The watch scene is reasonably amusing.

Now comes the Csárdás.  This is the wrong order but works fine.  "Brüderlein und Schwesterlein" for Falke and chorus is a personal favorite.  There's a guy taking photographs.  Oops.

On to the jail.  Frosch's long pantomime is cut.  All proceeds exactly as it should except Orlofsky removes his disguise and shows Malena Ernman.  I smile and sing along.  "Und mein Schlafrock?"  "Requisite."  [And my dressing gown?  Properties.]  In this version everyone is part of the revenge set up, which explains a lot.  A good English translation of the title would be Revenge of the Bat.  I do love it so.
#ad