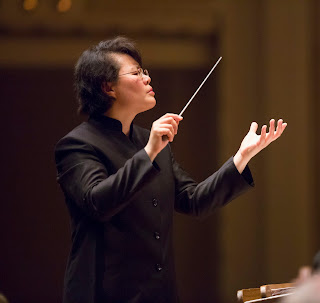 The Sacramento Philharmonic and Opera presented Part II of its Russian Festival last night.  See here for Part I.

Sergei Rachmaninoff's Third Piano Concerto (1909) followed with Andrew von Oeyen on the solo piano.  He was our pianist from last week and is very exciting.  Chen used a score on this one.  This is the concerto I heard in Berlin in 2016.

After the concert our pianist mentioned Sibyl Sanderson, an opera singer from Sacramento and Massenet's inspiration for Thais.  To honor her Andrew played a piano arrangement of The Meditation from Thais.  Beautifully.

Last came Modest Musorgsky's Pictures at an Exhibition (1874) in an orchestral arrangement by Ravel.

Russian music is lots of fun.  Our festival stuck strictly to Romantic and Neo-romantic works and covered the main highlights.  Stravinsky, Prokofiev and Shostakovich did not make appearances.