Lohengrin from Bayreuth -- the Blue Lohengrin 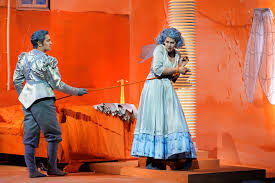 The complete Lohengrin from Bayreuth has been posted on YouTube.  Piotr replaced Roberto Alagna in the title role, probably because Christian Thielemann had worked with him in his debut in the role in Dresden.  Piotr is quite successful in this role.  Lohengrin doesn't take on the Heldentenor tone seen in later Wagner.  Anja Harteros is making her Bayreuth debut here.  In her interview she says that Thielemann never does anything the same way twice.

At the beginning of the opera Elsa is already bound as a prisoner.  You will note please that the wings some of the characters wear only appear on the ruling classes.  King Heinrich has them, as do Friedrich and Ortrud, and of course Elsa.  This makes them symbols of position?  When the duel begins, the fighters fly up into the air, which makes the ropes defining the fighting ring irrelevant.  Lohengrin steals Friedrich's wings and is awarded his own set to adorn his costume when he wins the battle.

The electrical equipment that adorns the stage is large compared to the people.  So is it a generating station or are the people simply supposed to be small.  Nothing is explained.

In the act break there is a wonderful interview with Waltraud Meier where she tells her audition for Parsifal story.  She was officially there to audition for Fricka and was asked to sing Kundry.  She was cast for Kundry at the first try.  She was virtually a child.  I'm always surprised how much German I still have.

We are in the second act and Ortrud is revealing to her husband Friedrich that she has different gods.  She tells him if she had the power, her gods would defeat Lohengrin.  She is also tying him up.  Do we begin to note a theme?  She has him all tied up and promises revenge.

Meier and Harteros are well matched in their scene together.  Ortrud warns Elsa that a married woman is powerless.

I love the visuals between scenes, but the first half of the second act is quite dark and doesn't show up on my computer very well.  I don't recognize the costumes.  They look closest to people from Dutch master paintings.  The colors are similar, but the men have different outfits.  I will forever call this the blue Lohengrin.  It's darker and more serious than any I've seen before.

In the bridal room they take books out of the bedside dresser, which makes it a motel, I guess.  They argue, and he ties her up.  She is not happy.  At the end of the scene Friedrich comes toward them and is killed by the electrical apparatus, apparently.

The singing and music are lovely, but one misses the romance.  Spoiler alert.

In the final scene lights in the shape of moths are seen.  Neither Elsa nor Lohengrin have their wings here.  One last bondage, this time Ortrud who still has her wings.  A green man comes out.  Lohengrin says, "The duke of Brabant," indicating the green man.  Lohengrin leaves and everyone falls on the ground, except the duke, Ortrud and Elsa.  Elsa takes the green man's hand and cries, "Weh.  Mein Gatte."  Woe.  My husband.  Usually it is the brother that returns here and the "Mein Gatte" refers to Lohengrin's departure.  Why we have a green man is anyone's guess.

Elsa is given more grounds for her rejection of Lohengrin than is usually the case.  She frowns virtually the entire time.  It won't become a favorite, which is currently bestowed on the blue t-shirt version.  See some highlights here.

Footnote:  it has been suggested to me that the green man at the end is Gottfried, but why would Gottfried, Elsa's brother, look like that?  I like it when the production explains the opera, but this one didn't.  Musically it was fantastic.

I don’t have big problems with the prodiction, but the green man in the end I don’t get. Where is the boy Duke of. Rabant?

In the second act wedding preparation, the female chorus walks in two buy two and throw confettis or something. They
are wearing a variety of rather ugly costumes, that do not remind any XVI or XVII century German or Dutch painting.

The usage of the wings is still a mistery

Musically is very good. I, personally, like Lohengrim a bit more heroically sounding when it needs, the lyrical part was OK. Nothing moved me, it was an intellectual and musical experience, not an emotional one.