Perhaps my perspective on this subject is different from other people’s because when I was young we owned a turntable that played 33 rpm, 45 rpm and 78 rpm records.  I thought this was cool and tried playing records at the wrong speeds.  The most revealing experiment came when playing 45s at 33 rpm.  We had quite a few of these.


At 45 rpm every singer sounded mostly the same as the others.  At 33 rpm all had slow, very annoying vibratos except Patti Page—Tennessee Waltz—who it seems had no vibrato.  At the slower speed she sounded like a normal baritone.  I concluded from this experiment that singers all have vibratos, with certain exceptions, and that a well-produced vibrato wasn’t actually heard by the listener.  If you’re hearing it, something is wrong.  These were not opera singers.

It turned out when I arrived at vocal pedagogy school that there existed a whole book on this subject which I cannot find on Amazon.  There is a different one if you're interested.  Scientific instruments were applied to a large repertoire of opera recordings and the results displayed on graphs.  These are called sonograms.  The unavoidable conclusion was that all famous opera singers have a vibrato, that it is present all of the time on virtually every note they sing, even when they are sliding or moving from one pitch to another.  The human brain integrates this into a single note.  The vast majority of people do not hear this pitch fluctuation.  This vibrato is about a half step wide and very regular in its pulse.  You don’t have to wonder—you can see it on the chart.

Here is an article from 1929:   By adding the component of modern technology they verified this conclusion at 95% of all opera singer notes.  The public likes a vibrato.  “It can not be just happenstance that vibratos are not only admitted, but required, in opera.”

To sound like a trill the vibrato needs to extend to about a whole step when the brain no longer integrates it into a single pitch.  Trills must be carefully and painstakingly taught because it is not natural.

Things can go wrong with this process.  A vibrato can be too slow which translates into a wobble.  It can also be too fast or irregular.  You will not get famous in opera if there is something wrong with your vibrato.

In my time in pedagogy school I observed quite a number of famous voice teachers at IU, and I don't remember any of them referring directly to vibrato.  I think an adult singer naturally develops a vibrato without being taught it.  They are taught to support the breath from low in the abdomen, and perhaps this is the feature of a skilled singer that creates the natural, even vibrato.

In the past I said:

In case you didn't know, the average opera singer has a vibrato that causes the pitch to waver for about a half step, or the distance between c and c# if you don't know what a half step is.  It wavers half of this pitch above and the other half below the intended pitch.  Listeners generally imagine the pitch to be somewhere in the middle of the wavering sound.  It is only your imagination that makes this a precise pitch.  So making comments about the singer being sharp for the whole aria may only indicate that your ear is interpreting the vibrato sharp.  Is she sharp?  Yes.  Is the exact same note also flat?  Yes.  Some singers push energy to the upper part of the vibrato or the lower part.  Pitch wavering is the same but energy is unbalanced.  Maybe your ear hears this as sharp or flat.  They aren't giving up their vibratos.  10/8/17

P.S.  Here is an excellent illustration. 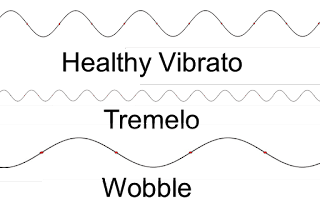 The term tremolo can also refer to an ornament that is unrelated to vibrato.

Dr. B--you and I have discussed this off-blog in the past. It's puzzling to me that in opera we (or I; could it be just me?) hear vibrato in most voices as a constant. that's not a well-constructed sentence. I seem to hear, quite often, opera singers "use" vibrato on every note--which is in line with your analysis--in a constant way. so every note (I can't hear it on fast runs, though) has the same vibrato. but in jazz, particularly, and I suppose in folk, blues, pop...--in jazz, singers (and instrumentalists) use vibrato in a conscious way...adding or removing it for emotional impact. Listen for this especially in Carmen Mcrae's ballad singing; or Lester Young's ballad playing.

maybe not everyone's taste, but mine for sure: https://www.youtube.com/watch?v=n_R9AGDvXe4

In opera vibrato is not treated as an ornament, which is what you are describing. In opera it's part of the color of the voice, part of what makes opera singing operatic.

...and...I'll begin listening to opera with a different and upgraded attitude...