The Queen of Spades from Salzburg 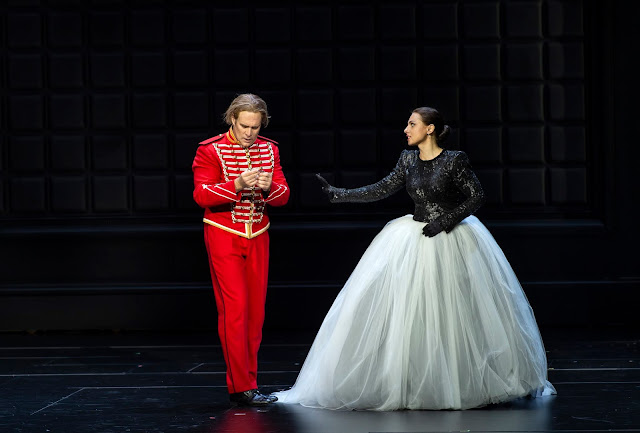 We called it Pique Dame.  This version of Tchaikovsky's The Queen of Spades on Medici.tv from Salzburg was conducted by Mariss Jansons, the same man who brought us the version from the Netherlands here.

The period is set in the libretto because it says Catherine the Great makes an entrance in the party scene.  Here she is a giant skeleton, so make up your own mind.  For me this production is standard minimalism.  It works like no minimalism I have seen before.  The giant skeleton is the only thing that could be called an inexplicable nonsense, a feature of many modern productions, but it gets over quickly and goes back to the standard plot.  There's no minor character dressed up like Tchaikovsky to distract you from the opera.  There's just the opera.  What a concept.

We watch with no translation and don't mind at all.  Instead of the usual Hermann who stands around like a stick of wood, we have the brilliant physicality of Brandon Jovanovich in this role.  His costume makes him stand out from the crowd and his passion dominates the action.  I realized that I have been waiting for him.

It was lovely to see Hanna Schwarz as the old Countess.  Hermann points a gun at her, and she dies of fright before she can tell him the three cards.  Later she returns as a ghost and tells him the cards:  three, seven, ace.  He plays them and loses on the third card.  Just now I realized for the first time that the ghost of the Countess lies.  The third card was the Queen of Spades.  Well.  I guess I'm slow.

This played without any intermissions and for me without any warning.  Musically it was very beautiful.  Thank you.  I can recommend this version with added translation.  Without translation listen for "dri karti," three cards in Russian.

I have since read that Liza is supposed to be one of the Romanovs. I'm glad I didn't pick up on that.