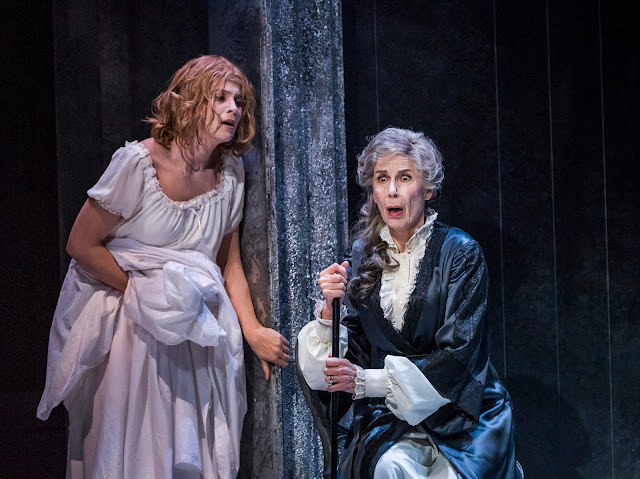 Samuel Barber's Vanessa comes to us from Glyndebourne.  So why is it never produced here?  I saw live in Berkeley a semi-staged version, but have never seen it live fully staged.  The libretto says 1905 in a "northern country," but the presence of short skirts means we must be later than that.  One of the choices for staging an opera is to choose the era of composition, 1958, which seems to be what we have here.  Cardigans.  In this scenario Vanessa began waiting in 1938.  When Anatol appears, he is wearing a WWII style army uniform.  The northern country is suggested through the presence of many blond women.  Constant smoking also suggests a certain era.

The production cannot exactly be explained.  There are giant mirrors which are moved about, but one is never quite sure if the things behind the mirror are reflections, imaginary events or views into another room.  It creates an atmosphere of mystery and perhaps dread.

At the beginning all three women--Vanessa, Erika and the Baroness--are impatiently awaiting the arrival of Anatol who has sent a letter telling of his arrival.  He is late, but there is a snow storm. Erika sings "Must the winter come so soon," the only known piece from this work.  He arrives, and Vanessa pours out her heart to him, thinking he is her old lover of 20 years ago.  She turns and sees that it isn't he at all.  She is mortified and escapes.

Our Anatol is something of a cad.  He is here because all his life he has heard of the beautiful Vanessa and wants to see her for himself.  But if left alone with another woman, he flirts with her.  He flirts with Erika and says, “I am Dmitri the pretender. Be my Marina.”  These two names represent characters from Boris Godunov.  She falls for this, and they spend the night together.  In the complex blocking an additional flirtation with one of the maids is added.

It is important to note that he first asks Erika to marry him, and only when she refuses does he ask Vanessa.  The singing is heavy and intensely operatic.

The production adds detail and atmosphere without obscuring the plot.  It ends with a beautiful ensemble.  Thank you.
#ad

Actually it was America mezzo Rosalind Elias who created the role of Erika at the Metropolitan Opera.