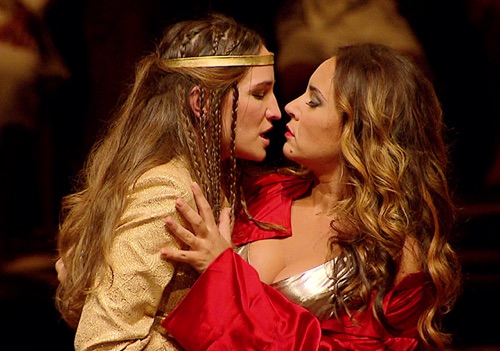 Monteverdi's L'Incoronazione di Poppea (1643) comes early in the era of Venetian opera, which included women, normal men and castrati in the cast.  It was commercial theater, so the casts were kept small to save money.  I guess 11 people were all, a much smaller bunch than our cast.  They handled this by casting everyone in many roles.  I am here to see the first three ladies:  Sonya Yoncheva, Kate Lindsey and Stéphanie d'Oustrac, all people I like.  Our girls sang pretty much in their standard operatic voices.  I have only seen Yoncheva in Verdi and Puccini, so I was surprised this worked so well.

This opens with a prologue by the gods Virtue, Fortune and Love arguing who is more important.  Part of the orchestra is on the stage in this scene.  Then they move to in front, though the space could hardly be called a pit.  Throughout the entire opera the stage is cluttered with dancers in unidentifiable costumes.  They seem intended to represent something, but we are not told what.

There is partial nudity and foreplay, which I consider progress in the subject of sex in opera.  Yoncheva can do anything, but by the end of the opera the music began to sound repetitive and uninteresting.  3 hours is too long.  It did not lure me from the version with Alice Coote and Danielle de Niese.  There are lots of DVDs to choose from, and I have not seen all of them.

I agree the production is a mess (apparently all those people on stage are "the forgotten of history", though how they wandered on the set of Poppea is a mystery). I also agree the Glyndebourne production still stands. Off the top of my head there is the older one with Yoncheva and Cencic and the one from Madrid with Connolly and Persson but I too have not watched them recently/carefully.