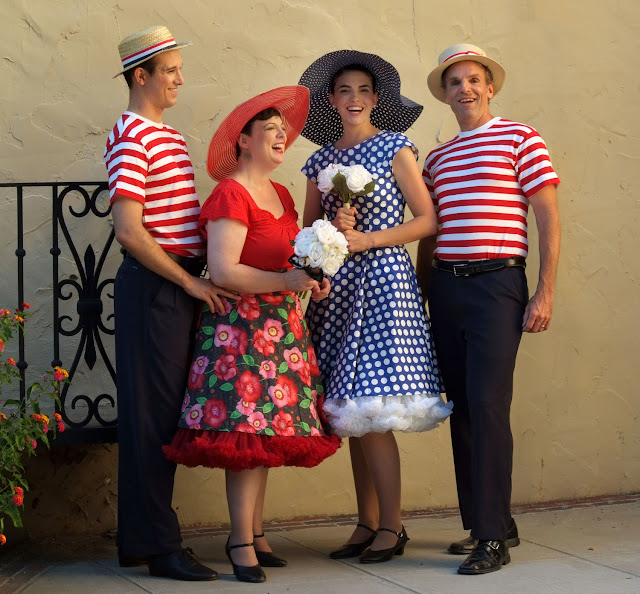 Gilbert and Sullivan's The Gondoliers, presented last night in Sacramento, is a new one for me.  Robert Vann, the director and portrayer of Luiz, pointed out that it is produced less often than other G&S works because it is a big show with a large cast.  The ladies announce that they are four and twenty when obviously there are only twelve of them.  No one minds this.

The plot is also complex.

Duke:  Mike Baad
Duchess:  Kathryn Peperkorn
Casilda, their daughter:  Tiffany Patterson
Luiz, attendant (or where is he from?):  Robert Vann

Here is an actual gondolier posing for this picture.  Isn't he dreamy? 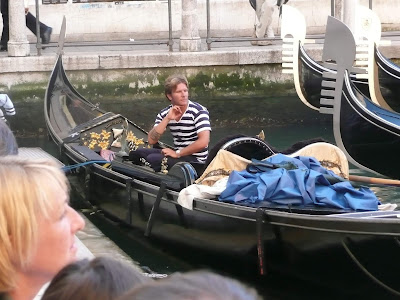 Our gondoliers wore shirts very much like this.  The red and white striped shirts are to distinguish the two gondoliers the girls are fussing over.  Our opera did not include any gondolas.

They are blindfolded and select.  The other girls pair up with the remaining gondoliers and everyone gets married.

The Duke, Duchess and their daughter Casilda from Spain show up looking for the Prince of Barataria, the man Casilda married when she was very young.  A young man named Luiz accompanies them carrying a snare drum, presumably to announce the arrival of the Duke and Duchess.  Luiz and Casilda have fallen in love.  The King of Barataria has died, and the new king must be found.  The Grand Inquisitor tells them the new king is one of the Palmieri brothers, but he doesn't know which.  The brothers decide to rule jointly.

Inez is found and tells who is the new King.  To produce the required happy ending only one of the characters can be the King of Barataria.  You must guess.

This was lively and entertaining and included no hit tunes whatsoever, unusual for a G&S opera.  It was well attended.

I want to thank Debbie Baad for the correct cast member names for the performance I saw on Friday.