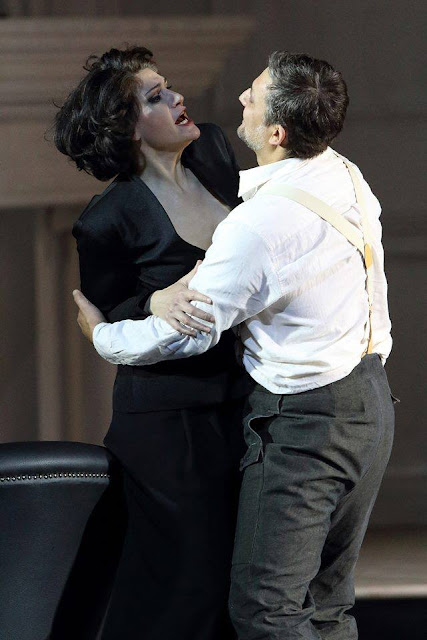 This performance of Verdi's Otello from Munich is unquestionably a masterpiece. We have here the ultimate domestic violence story.  It was a simple regie production in modern dress with many pictures to be seen here.  There are a few plot alterations.  Normally Otello and Desdemona are married before the opera starts, but here they marry shortly after he returns from war, after the love duet.  People enter and cover their bed with flowers.

In the past I have doubted that this opera was exactly right for Jonas Kaufmann, but now I may have to reconsider.  He refrained from pushing, as do many tenors here, and won me over.  This Otello is not black but he is also not beautiful.  This is why it is so easy for him to believe that this particular woman doesn't love him.  He believes in himself as a warrior but not as a lover.  Jonas has created this character in the manner of the great performer he certainly is.  We are lucky to live in his time.

The sets and staging focus on the couple and their relationship, and who better to play this couple than the great opera stage couple of our own era:  Jonas Kaufmann and Anja Harteros.  Anja is a stage creature.  To come to her greatest triumphs requires the stage where she can show voice, movement, beauty, expression and I think perhaps most of all acting.  In my mind I think of Desdemona as a light, relatively insignificant role.  With Anja we have the greatest depths of tragedy.  We have love and fear together in abundance.  Like many others before and after, she prepares for her own death and does not think of escaping.  It was a triumph.

And as if that were not enough we have the dream Iago of Gerald Finley, one of the greatest singing actors in opera.  You need to overlook the outfit where he wears baggy pants and Adidas.  He approaches Otello rather more intimately than one would generally expect, creating a new dimension to the opera.  Our imaginations immediately leap to lovers.  Could it be jealousy that motivates all this mayhem?

Petrenko was marvelous, as usual.  In my group people complained that he is seen rather more during the drama than they would prefer.  At the start they jumped immediately to film of Anja, which meant no shots of Petrenko.

This was a genuinely great thing.  I'm going to watch it again tomorrow.