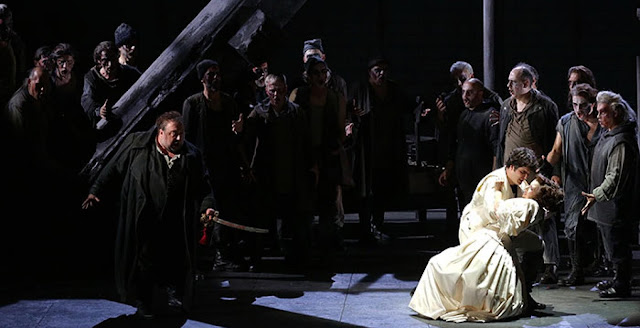 This year Verdi's I masnadieri (The Bandits) was presented at La Scala.  We have taken notice because the female role is sung by Lisette Oropesa.

This traditional production completely violates my rules of portraying a plot.  The director's primary job is to explain the plot.  So who the hell is this guy in the military uniform that wanders around the stage in all these scenes?  Carlo before he became a bandit?  Francesco before he became a shit? Who?  Carlo is the fat guy.  So perhaps the director didn't like him and gave all his stuff to someone else.  Sigh.  I hate that.  He carries around a notebook where he occasionally writes, so the speculation is that he might be Schiller, the original writer of the story.

Lisette is spectacularly good in this, moving gently away from her soubrette Fach into full lyric repertoire.  I like her sound, her technique, her phrasing, anything else I can't think of.  She is developing into a truly wonderful singer.  This role was written for Jenny Lind who appears to have been a lyric soprano.  There is a lot of bombastic early Verdi singing throughout this opera, but the soprano is sweet and lyrical throughout.  It is an excellent role for Lisette.

The bandits seem to be having a lot of fun except for Carlo.  They leap and dance around. Francesco repents but the priest refuses to forgive him.  The silent writer comes to life and kills Francesco.  Then Amalia comes out and says that whether Carlo is an angel or a devil, she will always be his wife.  So then he kills her.  This plot is basically BS.

The male singers are all on the same page with the big Verdi sound.  The most applause was for Pertusi, Sartori and Oropesa, all well deserved.  I never have to see this opera again.  Just listening and ignoring the action is always an option.