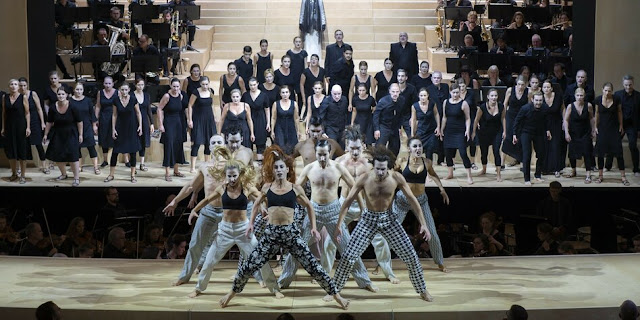 In honor of World Opera Day I have chosen to watch Henze's The Bassarids from the Komische Oper Berlin.  It both is and is supposed to be in English.

I've never actually seen an opera by Henze, so this seemed suitable.  We are in Thebes.  Semele is buried here, and a flame is kept burning for her.  While opera purports to be based on Greek theater, the plots generally come from other ancient sources.  This however is based on Euripides.  Imagine that.  It turns out to be a revenge opera.

The plot is hard to follow, at least at first.  Dionysus wishes to be worshiped, but the new young King Pentheus thinks this is childish.  Everyone runs off to the mountains when they hear Dionysus is coming.  Pentheus puts out the flame of Semele.  The king opposes the revelry that happens on the mountain and swears not to eat, drink or lie with women.  But then he has never been there, and knows nothing of what happens.

What makes this hard to follow is that we are not given much in the way of visual clues.  Tiresias must be identified by the fact that he wears dark glasses.  Everything else is the usual black and white regie costuming.  In the photo above the people in vivid outfits are ballet.  When Pentheus asks who leads the singing and dancing, a beautiful black man in a black suit stands up. This is my first time to see Sean Panikkar, an American.  He brings true expression to this angular modernist music.

To entertain themselves the Thebans perform The Judgement of Calliope.  This is the myth of Adonis.  Don't make me explain it.  And suddenly they're tearing off their clothes and running off.

We are immediately back to Pentheus and Dionysus fighting.  Dionysus persuades Pentheus to dress up like a woman.  He's having trouble with the high heels.  Dionysus uses his god power to control Pentheus.

Komische Oper Berlin is the right context for this work.  It is a small theater with a portion of the stage in front of the orchestra.  The pit is too small, so parts of the orchestra are at the sides of the stage. The music is like background music to a movie.  If viewed in this way, it works well.  It gets very intense to the end.  It ends with some beautiful music for Agave who kills her son while under the influence of Dionysus.  It is a kind of universal tragedy.  I thought worshiping Dionysus would be more fun.