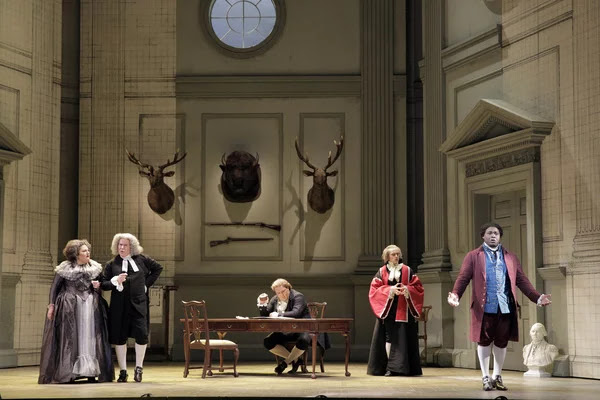 The new production of Mozart's Le Nozze di Figaro at the San Francisco Opera is made for me, or perhaps for anyone who for all their life has experienced architectural dreams.   My mind invents buildings that don't exist in reality.  The building of this new production is in the style of American colonial Philadelphia, Pennsylvania, at the time of the Revolutionary War.  Because it's Pennsylvania, a colony founded by Quakers, and not Virginia, I think we may presume that the servants are not slaves of the Count Almaviva.

The American Revolution concept only occurs occasionally.  In one scene the Betsy Ross flag is unfurled quickly, and when Cherubino is assigned to the army, he appears in a George Washington style army uniform.  The Count appears in a variety of colors including red, so we are not quite sure which side he is on. In the pre-talk the host mentioned that this opera observes The Unities which require a play to have a single action occurring in a single place and within a single day.  I learned about this in school long ago and have not heard of it since.  Observing the unities doesn't happen very often in opera.  I'm tempted to make a list.  The place is in and around the Count's house. The action is getting Figaro and Susanna married, and this is accomplished in a single day.  There is an irrelevant subplot involving the Count's page Cherubino and his sudden, overwhelming interest in women.  The staging suggests a pairing with Barbarina, but we know he will go on in this direction. 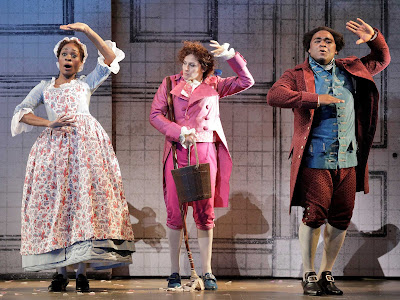 We were treated to conceptual continuity throughout.  The handling of all plot elements was smooth and painstaking.  The production contributed to this by providing curtains decorated in the architectural style and easily movable scenic elements.  The curtain comes down, and we quickly move to the next scene. There was great attention to detail.

Obstacles to the wedding are many.  The count has become interested in Susanna and moves forward with his desire to force himself on her.  He threatens to refuse to allow the marriage.  He also helps Marcellina in her desire to marry Figaro who has borrowed money from her.  Spoiler alert:  she turns out to be his mother.  I enjoyed that my rule of colorblind casting was observed.  A comic element was added to the story when the two white actors, Marcellina and Don Basilio, were found to be the parents of black Figaro.  "Suo madre?"  This obviously long time couple were included in the wedding ceremony.

By far my favorite bit of this production was the Count.  He was the biggest asshole I've seen in the part.  He gets his comeuppance in the end, or you might find he has gone too far.

I had a strong impression toward the end that this opera might be thought of as a symphony with the voices orchestrated into the texture.  I don't know if I could explain this.  I might be describing the conducting which was done by a man who previously led Strauss' Elektra here.  The singing was consistently excellent and blended more than usual with its accompaniment.

It isn't my favorite, but for overall quality and a complete lack of confusion about the plot it wins.

in a theater appreciation class for active older adults today (Friday) I was tempted to make a speech: "if you are curious about grand opera but haven't seen one," go see this Figaro. It's almost perfect in terms of voices, costumes, stage presence, design, everything...the whole high-concept thing is cool, but kinda irrelevant to the neophyte. this is simply strong & compelling and fun from top to bottom. (and that's from someone who doesn't particularly like Mozart....and was looking at his watch all through the fourth act....) dug the Count a whole lot. and Suzanna (sp), and...everyone...