Porgy and Bess on Broadway 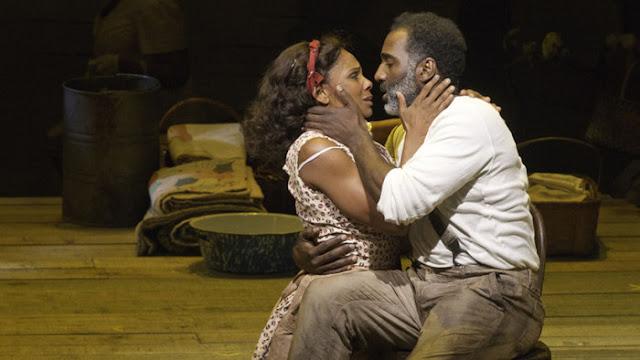 I am watching a “non-television” film of Gershwin's Porgy and Bess from the 2012 Broadway production.  Until I saw this, I did not realize that there are actually 2 so very different versions of this work.  Until now I have only been aware of the opera version where all the text is sung and accompanied by a standard opera orchestra, the original version from 1935.

The Broadway version is substantially shorter and includes spoken dialog written for this production.  The sound of the recording isn't good enough to understand most of this.  As an opera fan and musician, I very much miss the sound I am used to.  I'm getting more of a swing band sound here with a lot of brass, or perhaps it should be described as a pit band.  If there are violins, I'm not hearing them.  The singing is pretty good, but the backup kind of leaves them hanging.  I haven't kept in touch with the Broadway sound in the 21st century. Audra is classically trained, but I don't believe the others are.  This is just my opinion.

The aim here isn't opera but is instead to produce a realistic, life-like view of southern black culture.  It is felt that presentations by large opera companies don't achieve this.  There is a lot of realistic acting, occasionally approaching actual abuse.  I've seen Audra in a full length work before, live for Mahagonny, and she is astounding here.  She quit the run early because of illness.  I can see now that she spends a lot of time shouting, not a good idea for a singer.  I remember well going to sports events as a teenager and its effect on the voice.

Though Porgy and Bess has always been controversial, my own perspective doesn't really have anything to add to this argument.  Many count the entire story to be racist. Edwin DuBose Heyward who wrote both the libretto and the novel it is based on was southern white and of the planter class.  Read Audra McDonald's take on racism in Porgy and Bess here.

This is mind altering, not at all the Porgy and Bess of memory, but still one knows that it does not exist without Gershwin.  This particular version doesn't exist without Audra McDonald.  The general impression is one of intense raw power.  It's rather frightening.

I think it is regrettable that there is no commercial film of this.  I feel glad I saw it at all, but a commercial film would result in clearer sound, making the dialog easier to understand and the music more beautiful.  It did not woo me away from my operatic version.  I could almost count this as a new opera.