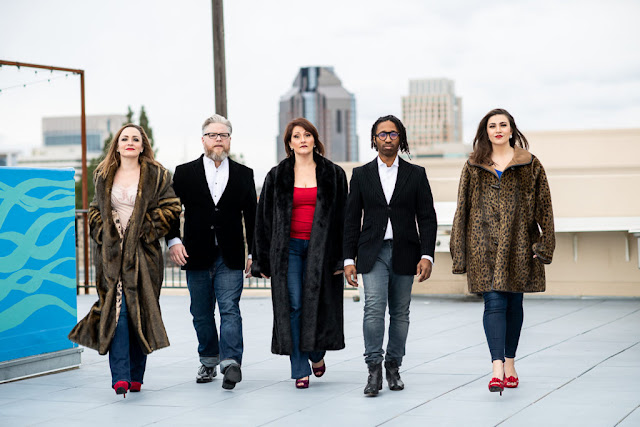 Bones of Girls by Ryan Suleiman was given its world premier this weekend by Rogue Music Project in Sacramento.  I enjoyed this quite a lot, but it's going to be hard to explain.

They are in tune with their time.  The music, though scored only for piano, was densely modern.  Interesting remark in the lectures after the opera, "The words take a lot longer set to music."  This was a complaint from the composer.  If they want a lot more words with the same music, they shift to talking.  But no talking here.  That's a current fad.  There did not appear to be any vocal ensembles.  The three singers, Carrie Hennessey, Kevin Doherty and Omari Tau, a kind of priest-like character, sang well this somewhat difficult music.  They created their characters while being upstaged by children.

The story is something that is written about more recently than it was earlier in my lifetime.  A woman remembers sexual advances from her father when she was a child.  In this story he wishes to marry her.  She escapes.  We see this part of her life in a flashback.

The staging was complex.  The chosen performance space isn't really suitable for a daytime performance, which is what I chose to attend.  The moon shines down, only here just in your imagination.

The four children who are the puppeteers play together before the opera begins.   The girls handle the child Idiot Girl who is quite attractive.  The boys are a pack of dogs as hand puppets.  It was complex and surprisingly moving.  The lively children at the beginning lie inert on the floor at the end.