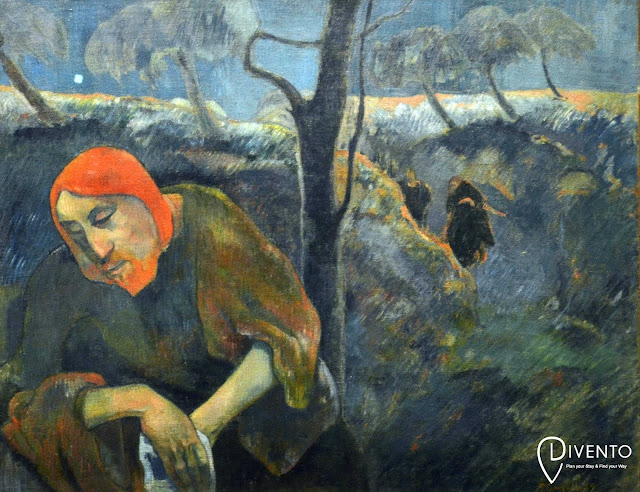 The film about portraits by Paul Gauguin (1848-1903) in my local movie theater came in two parts.   The portraits in the exhibition were used to illustrate a biography which also included a few photographs.  The above picture, a self portrait, was compared to Christ on the Mount of Olives.

Gauguin was born in Paris but lived for several years in Peru with his Peruvian mother.  Who knew?  He also married a Danish woman, had four children, and abandoned her.  He lived in Arles for a short time with Vincent van Gogh.  It may have been his fault that Vincent cut off his ear.  As a young person, Gauguin's paintings look pretty conventional.  He argued with Vincent but was very much influenced by him.

I tried to compare this historical context with my idea that you should just look at the paintings and let them form an idea in your mind.  Gauguin may provide a possibility because the pictures only vaguely represent reality.  It is what they look like, not what they represent that matters.  He is not painting reality, and it is important to realize that.  Photographs show that Tahiti was forever changed by Christian missionaries by the time Gauguin arrived there.  He had to die before he became famous.

The second half showed the exhibit at the National Gallery in London with commentary by artists and art critics.