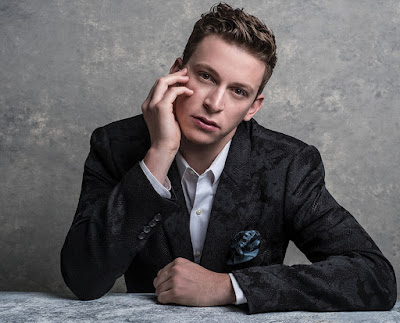 This is sort of a bad news entry.  I have been driving to Davis to see the American Bach Soloists since I moved to Sacramento.  My first entry, I believe, was in 2013.  I was happy about the fact that they played mostly Bach and in excellent style.  I attended performances of the St John Passion, the St. Matthew Passion, the Magnificat, the B Minor mass, Brandenberg Concertos, Orchestral Suites, etc.  That's a lot of Bach.  Occasionally other things appeared.

Well, Monday they performed only one piece by Bach:  Concerto in A Minor for Harpsichord, flute, violin, Strings and Basso Continuo.  Well, that sounds like a concerto grosso to me.  That's a small group of soloists who play both with and without the larger group of strings.  It was just ok.

In addition they played some pieces with Aryeh Nussbaum Cohen, a countertenor.  I have recently warmed up to countertenors, but would always prefer to hear a female mezzo.  Oh well.  I wish I liked him better.  He sang:

This is the first time I have not enjoyed one of their concerts.  Part of this is old age which makes it exhausting to drive to Davis.  The conductor Jeffrey Thomas said that they would be doing less Bach this season.  They would teach us to enjoy other things.  I have only gotten really enthusiastic about their Bach.  That's why I'm here.