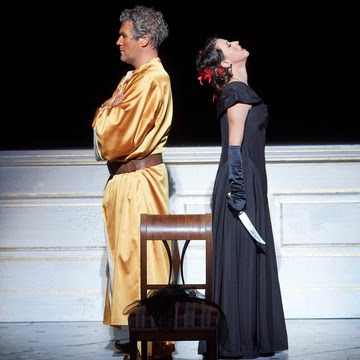 Mozart's Die Entführung aus dem Serail  (The Abduction from the Seraglio), 2020, comes to us from the Wiener Staatsoper.  It is directed by Hans Neuenfels, one of the more scandalous regie producers.  One of his characteristics is to dress the chorus all in the same outfits.  Here in spite of the fact that they are a mixed chorus, they are all dressed as men in black.

This is a Singspiel, which means it comes with spoken dialog in German.  In the original version of the opera there is a character, Bassa Selim, who does not sing.  Everyone else both sings and speaks.  So Neuenfels has seized on this and doubled all the rest of the cast.  So in addition to the singers, he has cast a whole other cast who play the rest of the roles and only speak.  He has also added more words.  This is hard to follow.  Two people in the same outfits are the same person.  You get a lot of easy to understand German from the actors and beautiful singing from the singers.  The actress Blonde occasionally speaks English.  "Me too."

Lisette is singing a very serious aria, and a young man in his underwear is holding a giant snake.  Huh?  What you would want to keep from this is Lisette and her arias.  "Martern alle Arten" is especially great.  She changes the opera completely.  Suddenly it is enormous.

I can think of only one semi-legitimate reason for this double casting.  Singers have careers that take them all over the world.  This is why the performing of operas originally in other languages but sung in the local language of the opera house is a practice that has pretty much died out.  We perform Hansel and Gretel and Magic Flute in English, but that is pretty much it.  The singer learns the role with the original text and then sings it everywhere with only some brief rehearsal.

So Neuenfels wanted to add a lot of new German dialog, and in order to have extended rehearsals, he assigns these new words to local people he can rehearse for a long time.  This is the only thing I can think of.  We don't care about this added dialog.  Maybe Neuenfels doesn't really like opera.

They love only Lisette.  As do I.  Serious booing for Neuenfels.

I was in Romania on business in January 1998 and saw this opera at the Bucharest opera house, sung in Romanian with Romanian surtitles. Didn't help me a bit, but it was still fun. BTW, the loge seat (I had the entire 11-seat box to myself) cost the equivalent of $1.92.