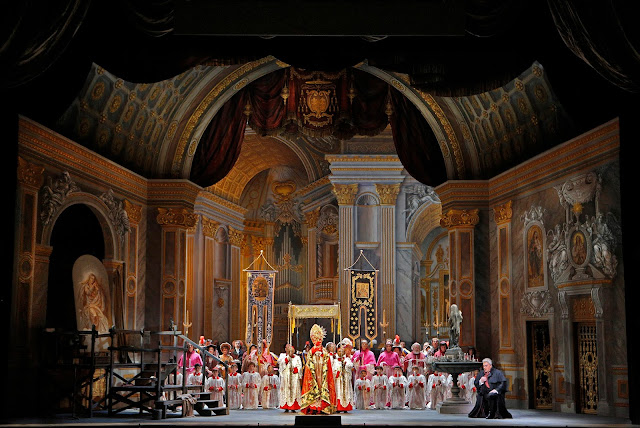 When this performance of Tosca first played in San Francisco in 2014, I must have missed it.  It is being streamed today from the San Francisco Opera.  I saw Brian sing Cavaradossi in Santa Fe in 2012, and may have felt it was to soon to see him again.

There are some fun things in this production.  From the evidence, Tosca seems to be the most conservatively dressed female in all of Rome.  In the Te Deum we have men in uniforms of the Swiss guards.  In Act II we see that the walls are painted with figures, as they would be in the Palazzo Farnese,  but the lighting is too dim to allow us to see them.  In general they have done a wonderful job of creating the atmosphere of Rome.  A little more light would have been nice.

Mark Delavan is fine but not really snarly enough for Scarpia who needs to project evil in the sound of his voice.  But then I've seen Thomas Hampson in the role, and he isn't snarly at all.

Brian is lovely, handsome and romantic.  Better than at Santa Fe. And Lianna Haroutounian plays the Diva with charm and intense jealousy.  She's trying to make the best of a bad situation, and ultimately fails.  She presents the varied emotions of the character vividly.  I like her very much.  She is why you would want to see this.  She crosses herself before jumping.  Of course.