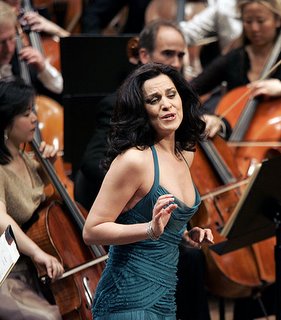 Just when I thought there was no more classical music on television, there was Angela Gheorghiu, Lorin Maazel and the New York Philharmonic.

Matt Dobkin has written about Angela in his book, saying she is a real pain in the ass. Well, I don't know anything about that. She had a very nice interview with Beverly Sills in the intermission. Sills got Angela in the mood by saying that her father was from Romania, and he always said the most beautiful women in the world come from Romania, and then Sills gave a little nod toward Angela.

If Angela wants to be the diva of her era, and she would appear to have the voice and looks to aspire to this title, she will have to deliver the goods. This program included all the showpiece arias of the post romantic:

It was lovely. She is a lyric soprano with spinto possibilities, exactly the right voice for these arias. How refreshing to hear someone who is actually too schmaltzy, too outward, too expressive. She sang a Romanian song as an encore. Brava. More, please.
Posted by Dr.B at 5:11 AM