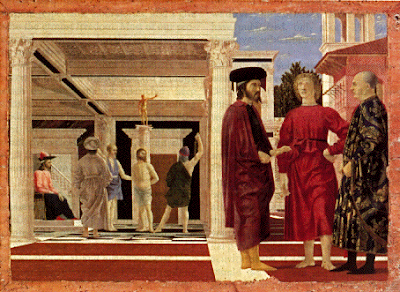 One of my hobbies is collecting viewings of the paintings of Piero della Francesca. I have been on the Piero trail which starts in Arezzo and goes across the mountains to Urbino. It goes on to Rimini, but I have not made this part of the trip yet. Collecting is more fun when something is left undone.

In Arezzo is the cycle The Legend of the True Cross which follows the history of the cross from its birth as a tree onward. The first time I went to Arezzo the cycle was in restauro, with scaffolding filling the entire nave. To my great surprise it was possible to view the paintings while the work was going on. We climbed the scaffolding and stuck our noses within a foot of the paintings. It was very exciting, much more exciting than the next time I came and had to view from the floor with everyone else. Further up the hill in Arezzo in another church is Piero's painting of Mary Magdalene.

Then I drove on to San Sapulcro and Urbino. The Pregnant Madonna and the Resurrection are the most interesting in route paintings.

In Urbino are two paintings: a Madonna and the Flagellation, a small painting kept behind glass. They don't let you stay alone in the room with the paintings. I let my nose cross a hidden beam and set off an alarm. The man next to me said "Mani in alto" with mock seriousness. That's "hands up" in Italian.

In London at the National Gallery are three Pieros all in one room. The Baptism, the Nativity and a Saint Michael. I particularly like the nativity and was surprised to see that it gives a three dimensional effect when viewed in real life that you simply don't see in the books. A framed photo of the group of singing angels hangs on the wall in my house.

Piero has evidently only recently been considered interesting by the art world. The coolness of expression on the faces of the people in the paintings suits us very well, we like especially the idea of a cool, all-knowing angel, but was not at all to the taste of the Romantics.

I love it that people obsess over the Flagellation, a very odd painting with a flagellation scene on the left and three men in a circle on the right. There are two whole books, both of which I now own, where the authors obsess over who the people on the right of the picture are. Both provide supporting photographs of paintings of their choices, which are completely different. I love it when people are so fanatical about art.

There is also an excellent book in Italian called Alla ricerca di Piero della Francesca, In search of Piero, which describes what the cities along the Piero della Francesca trail looked like in Piero's time. If you can't read Italian, which is surprisingly easy, then look at the pictures.