Last week I received a package from Argentina in the mail. I thought this was someone's name, but no, the copy of the DVD for Cecilia Bartoli's Barcelona concert of her Romantic Revolution tour that I had bought on Amazon came from Argentina. In classical music terms the USA is a third world country. Everyone gets stuff before we do.

The concert is basically the same one I saw in London last December, with an added encore of "Yo que soy contrabandista." Cecilia was in excellent voice in Barcelona and showing the effects of a cold in London. My favorite track is the Willow Song from Rossini's Otello. Cecilia is in form.

The set also comes with another DVD about Maria Malibran and Cecilia's quest to rediscover her. Bits of this I had seen before, but it was nice to see them all again. Cecilia is almost as at home in French and English as she is in her native Italian. She gets the French glottal "R" as I certainly never have.

Cecilia is in Lucca opening the Museo Mobile Maria Malibran, taking a small tour of the exhibit. 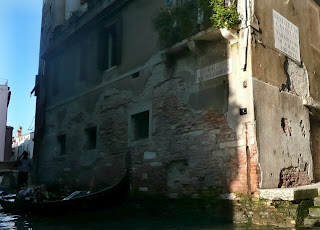 Cecilia is in Venice riding a boat past the Rio del Malibran. She visits the Teatro Malibran, the steps of La Fenice and around Malibran's Venice.

Cecilia is in the Galeria in Milan.

Cecilia plays Maria's piano in Brussels. It could use a tune.

Cecilia visits Maria's birthplace in Paris, showing the room where she was born.

There is a short clip of Cecilia recording "Una voce poco fa." Perhaps she recorded this for a possible track on Maria and later rejected it. Both Cecilia and Maria made their professional debuts in Rossini's Barber.

Cecilia visits her childhood home in Rome where she says no one has been living for seven or ten years. Maybe I could get her to loan it to me. The living room is full of bicycles. She tells about her mother meeting Prince Charles, of rehearsing her to say "Your royal highness" to him. Then when she met him she said, "Buona sera. Sono la mamma di Cecilia." E perfetto. There is a brief audio of mamma singing "Libiamo" from La Traviata. Nice.

There is a clip of Cecilia singing "Sempre libera" that I have certainly never seen before. She does this very well, but skips the high note at the end.

Cecilia is at the Villa Pamphili in Rome where she lived opposite. Maria also visited there and sang "Casta diva" from the porch.

Cecilia follows Maria to Naples, to the Teatro Mercadante and Teatro San Carlo where Malibran sang La Sonnambula. C. tries on some of Maria's stage jewelry.

Cecilia is at the Rome opera which she says still smells the same as it did when she was a child and sang the shepherd in Tosca. They play a tape of this. Fascinating.

Cecilia visits her father Angelo Bartoli. The pressure of performing was too much for him. Anch'io.

Cecilia is in England recording Balfe. Christopher Raeburn tries to give her an English accent. She speaks with more of an American accent.

Cecilia goes to libraries and museums in all these places. She talks about the accident in Manchester and credits Malibran's death to fatigue from her grueling singing schedule. A letter from Maria says that she was feeling ill and that her voice seemed to be gone.

Over each section Cecilia sings a track from the Maria album. The last scene is a visit to the tomb of Maria Malibran in Brussels. Inside is a statue of M. dressed for Norma. Cecilia takes off her hat. Here she sings "Casta diva."

The film cuts suddenly from place to place, but sometimes tiny letters appear on the screen to tell where we are. It is a beautiful film of Cecilia's fascination with Malibran. It was nice to see mamma again. I'm done being mad at her.
#ad