I took the quiz recommended by Eye Bags and it said I was a Komponist. 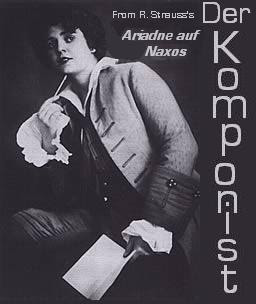 "You're the Komponist! You're endearingly arrogant, and arrogantly endearing. You live in a state of utter seriousness with intermittent transports of rapture. You think that, by virtue of your own high-minded genius, you're immune to the worldly wiles of women, but... don't you be so sure."

I've been told I was arrogant before. Utter seriousness with intermittent transports of rapture sounds pretty accurate, actually.

I tried again with more lies and got: 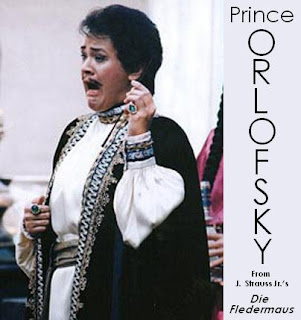 "You're Prince Orlofsky! Oh, the endless millions, oh, the oceans of vodka, oh, the terrible crushing ennui. Yeah, we feel real sorry for you. On the one hand, you're a magnanimous libertine who just likes making people happy. On the other hand, you're a batty Russian stick-in-the-mud who needs a good schmeck on the head. Gotta admit, though... you throw one hell of a party."

Nope. Got it right the first time.

P.S. However, it must be noted, I have always regretted that I never sang Orlofsky, but have no regrets about not singing Der Komponist.
Posted by Dr.B at 4:47 AM

Email ThisBlogThis!Share to TwitterShare to FacebookShare to Pinterest
Labels: MyFavorites