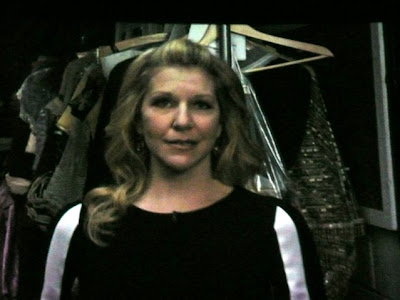 The only surprise for the HD broadcasts from the Metropolitan Opera (besides will you get to see or hear anything) is who will host. She is in town so why not ask Joyce DiDonato to host Gluck's Orfeo ed Euridice? She was excellent, though she didn't get to do quite so much. Orfeo was presented without intermission so she interviewed only James Levine and Mark Morris, the production designer, who introduced himself as an opera queen. We would like to see Joyce again. Singing? She would make a great Orfeo.

She wished Levine "Toi toi toi" as he left. When I began my stint at the Ulmer Theater, I was told that "Beinbruch" (break a leg) was reserved for sport in Germany. In the theater one said "Toi toi toi," preferably while spitting over the other person's left shoulder. Joyce left out the spitting. Presumably, without the spitting the good luck imparted is only partially effective.

It's actually supposed to be three acts, but was done as one. I am strictly guessing here, but I am imagining that some repeats were cut to create the effect of a through-composed opera. It still sounded like numbers to me. Overture, chorus, dance, recitative, aria. They made a point of mentioning that this was the earliest possible score that was being used and not the Berlioz arrangement.

Stephanie Blythe has a wonderful voice for this role with no weakening in the center. Her character is on stage throughout the opera. 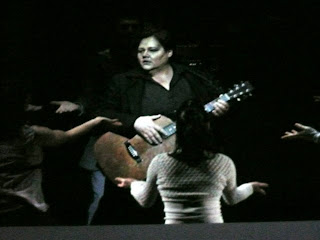 But this is a Mark Morris production and the ballet dominated the action. Gluck starts with Euridice already dead which focuses the action on the trip to the underworld. It's sort of an American Eurotrash minimalist production with modern outfits for the ballet and other characters on stage. The gimmick of the production is that the chorus who sit in the stage machinery, thus eliminating any need to move them around and leaving the stage to the dancers, are each dressed as an historical figure. When the production first came out, there was a quiz to guess who the historical figures were.

I have to say this. There was an incongruity in the casting of the gorgeous Danielle De Niesse as Euridice and the less than gorgeous Blythe, but the action seems to require that Orfeo be mad for Euridice regardless of whether or not the reverse is also the case.

I think the Amor was Heidi Grant Murphy. Sometimes cast sheets are handed out at the theaters for HD, but not this time.

After the fiasco at Glimmerglass, this was my first fully staged Gluck Orfeo. I thought it worked. I went to a different theater and there were no technical problems.

Amor was indeed sung by Murphy. I thought all three women sang very well. The dancing was excellent and added a great deal to the performance, although I heard quite a number of old folks in our audience grousing about it. After the opera, my wife and I compared notes on who we'd spotted in the chorus (I think my favorite was Frederick Douglass). I thought about looking online to see if there's a definitive list somewhere of all the characters, but I've been too lazy so far to do that.