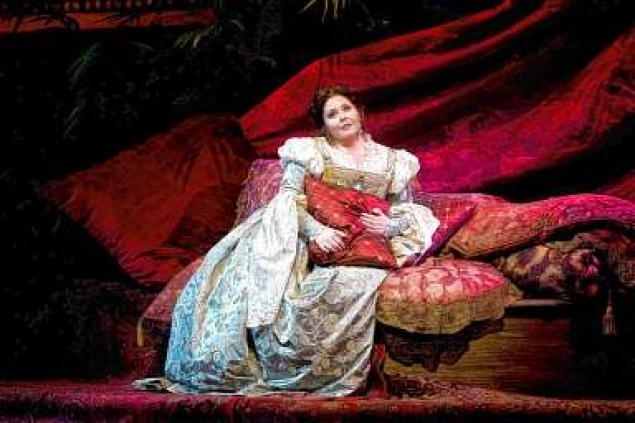 I went to Ernani Live in HD from the Metropolitan Opera to see Angela Meade.  She is older than I thought.  When she won the Metropolitan Opera National Council Auditions in 2007, she was 30.  In 2008 she covered Sondra Radvanovsky in Ernani, which I reviewed here, and one day when Sondra was ill, Angela made her professional opera debut as Elvira at the Met.  Let's just skip all that comprimario role stuff, what do you say?

So then in 2011 she won the Richard Tucker award, and in 2012 the Beverly Sills award.  Last fall she alternated with Anna Netrebko in Anna Bolena.  Believe it or not, she's done some other stuff.  You can see how a person would be curious.

This is the kind of voice anyone is looking for.  It's a pretty sound, and it's heavy enough to soar easily over the orchestra and chorus.  What does anyone want?  Coloratura with weight.  If you've got it, flaunt it.  And to top it off she appears to be easy to get along with and does whatever she's told.    This is the magic combination.  Richard Tucker only goes to singers who bring weight to the table.  Oh.  Sorry.  That means her voice has weight.  She is best described as a spinto, I think.  She makes it all look easy.

I would like to hear her in an opera I actually liked.  Ernani is very annoying.  Two of the cast, Ferruccio Furlanetto and Marcello Giordani, were in this the last time I saw it.  The cast added Dmitri Hvorostovsky as Don Carlo.  He sticks to his smooth lyricism, and it works very well.

I felt concerned for Giordani again this time.  He struggled with his part the entire time.  He should listen to Luciano, who did the best version ever of this opera, for the way he resonates his vowels.  Vowels are the key.  Instead Giordani muscles his voice around in a very disturbing way.

The Met puts together such fabulous casts for Verdi.  Marco Armiliato conducted.


Joyce DiDonato was the host for the Met simulcast.  I'm afraid everyone makes me miss Renée Fleming

In his interview  Ferruccio Furlanetto said with Verdi it is vital to be very familiar with the role and confident about how to sing each note.  Perhaps he was giving this advice to Marcello Giordani who spoke about the change in technique required for Verdi.  My advice would be to try singing it with his verismo technique and see what happens.  Whatever it is he's doing, it isn't working.

Dmitri Hvorostovsky brought his children who greeted Joyce in three languages.  They said something to her in Russian and she thanked them.  Dmitri mentioned that this would be the first time his mother gets to see him on the screen in the movie theater at home in Russia.

Angela mentioned Callas and Caballe as her role models.  I entirely approve of Monserat Caballe as a role model for her, but she doesn't have the heft of Callas.

Angela Meade was everything you could possibly want for this role -- or in a Verdi soprano at this career stage. Let's hope she doesn't try to do too much too quickly.

Hvorostovky was superb, as always, and I'm glad he doesn't take himself too seriously. "You REALLY want me to talk about breath control?" he asked Joyce DiDonato incredulously. But then he gave a reasoned reply.

Giordano needs to either find a different repertoire or retire, already. I was embarrassed for his performance, but this was hardly the first time he's done a crappy job in HD -- last season's "Fanciulla" springs to mind.

My wife has a major crush on Marco Armiliato and was exceedingly disappointed he wasn't interviewed during either intermission. I told her he probably needed the break, given he'd conducted six Met performances in seven days, as one of the slides prior to the performance noted.

Next season's twelve HD performances are an interesting mix. Gelb ran through them so quickly I forgot half of them by the time "Ernani" was over. Of the ones I do recall, my must-sees thus far are "Maria Stuarda" and "Les Troyens." I wonder if Maazel will conduct the latter, since it's one of the few operas with which he's been associated in the past decade.

Fabio Luisi's down for Les Troyens, Maazel has Don Carlo.