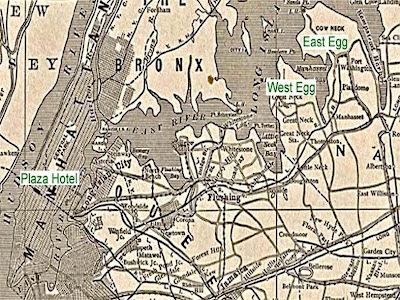 I read F. Scott Fitzgerald's The Great Gatsby once long ago, but I could not remember much of it.  I remembered people riding around in cars and that the millionaire Jay Gatsby was carrying a torch for Daisy.  This is considered the great American novel, and is a portrait of the beginning of modern life, with women in short skirts, cars, boozing, extra-marital affairs, and that great American pastime:  driving around.  Don't get the wrong idea:  boozing is as old as America, but it's less dangerous if you go home on a horse.  In 1922, the time of the story, booze was illegal.

The opera The Great Gatsby by John Harbison and presented by Ensemble Parallèle follows the plot of the novel pretty closely.  Even the ubiquitous giant glasses with wandering eyes behind them are reminiscent of the cover of the novel, though the appearance of the word occultist instead of oculist is not explained.

Nick is the perspective.  Tom and Daisy are married, have a child and live in West Egg.  Wilson and Myrtle are married and live in Flushing.  Tom is having an affair with Myrtle.  Nick is dating Jordan, a professional golfer, and lives next door to the mysterious Gatsby who lives in a large house in East Egg, throws wonderful parties and dreams of Daisy.  There are ten scenes in 2 acts in five locations.

The sets move smoothly from West Egg to Flushing, to Gatsby's house, to Nick's house, to Gatsby's, to the Plaza Hotel in New York City, etc.  Plenty of interlude or driving music is provided to accomplish this.  I thought the production for this complex opera was very successful.  No cars appeared on stage, but they were discussed and described.  The parties at Gatsby's house are fun. At one of the parties Charlie Chaplin in his tramp costume appears as a guest.

There is an on-stage band that plays jazz period music, in great contrast to the strictly modern music of the rest of the opera.  Period music also comes from the radio.  These two musical sources and styles are blended smoothly throughout the opera.  Jacques Desjardins reorchestrated the opera to achieve this effect.

I missed the mysterious, exalted nature of Jay Gatsby.  They work too hard trying to make him seem a fake, and they seem ridiculous complaining about the source of his income--illegal booze--while they are constantly drinking.  The poor man, Wilson, kills the rich man, Gatsby.  It's all a mistake.

Am I allowed to tirade here?  Modern composers seem all to be part of the musicians fallacy.  Musicians praise Placido Domingo and Janet Baker for being like them.  In a modern classical orchestra everyone has to play precisely what is written on the page.  Any alternative represents chaos.  The same can be said for a chorus.  The perceived absence of a singing style is regarded as a virtue, and elicits constant praise for the two above named singers.  So when modern composers are composing for classical singers, they do not conceive or encourage a style for the singers to use when singing their music.  Just reproduce the notes, and you're done.  The only problem with this is that it is the style that makes you most want to listen to the music.  Style is the parts that lie between the notes.  Where do you want anyone to slide?  If you don't know, who will?

So in most modern operas the singing is the least interesting part.  A modern opera is driven by the plot and the orchestra.  Susannah Biller who played Daisy was the most professional of the singers, but Erin Neff who played Myrtle showed the most style.  One couldn't help feeling that the characters were cast mainly for their looks.

Keep an eye out for a "Great Gatsby" feature film, coming out sometime later this year (I think). The only reason I know about it is because my wife is a huge fan of Leonardo diCaprio, and he's in it.

When I asked her, "Who's he playing," she answered, "The Dwayne Croft role." That's Nick Carraway, who Croft portrayed in the world premiere of the Harbison opera.

Sorry, Paul, he was Gatsby. He had to be. It was a great movie.